Favorite Quote:
I don't need a rose. I want a daisy you picked for my hair. I don't want some fancy box of chocolate. I want a pink frosting cookie you made just for me. Lets skip the upscale restaraunt and have a picnic in the park.

He looked up at the figure across the table; her head was bowed in concentration over a much-abused English notebook and the pen in her hand was moving at a speed that would put a computer to shame. He smiled and returned his eyes to the sketch pad in his hand. For several hours, the only noise to be heard was the frantic scribbles of her pen as it rocketed across page after page and the barley audible whisper of his pencil as it gracefully traced the contours of her face.

“Ugh, I hate writing endings!”
The sudden outburst had startled him, and a thick, dark line now ran down her right cheek. Absently, he picked up the white eraser lying at his elbow and began to rub the mark out.
“I know, Katie, it sucks and it’s due tomorrow. Just remember to breathe and keep your voice down; we are in a library.”
She rolled her eyes and hissed a sarcastic apology at him.
“Come on, Chris; tell me a story or something to help me finish this for class. Please, it always helps.”
He glanced up at her; Katie was looking at him, waiting expectantly, with her chin in her hands. Chris sighed in defeat, and tentatively began his tale.
“Once upon a time, in a far away land, there was an enchanted, shinning white city. It was ruled by a proud family; they were good rulers, fair and kind, and they had been graced with a daughter whose beauty was said to rival even that of the angels themselves.”
He paused, and bent to retrieve a packet of colored pencils from the bag at his feet.

“Well, what’s her name? The princess, I mean?
Chris hesitated and flushed scarlet before answering her simple question; Katie wondered for a brief instant as to why he was acting so peculiar.
“Her name…her name. Her name was Princess Katlina. Her parents wanted her to marry Lord Mason, a rich, snobby, influential person; Lord Mason was also very old whereas the little princess was about to turn sixteen. All she wanted for her birthday was a carriage license, not a marriage license. Princess Katlina made no complaint, of course, bound by laws as old as time itself to do her duty to her city and her family. Th—“
Katie cut him off abruptly and a look that fairly screamed ‘oh please’ was splashed across her face, easier to read than the almost finished essay in front of her.

“Her duty?! Come on!”
He took a deep breath to keep from snapping at her.

“Katie, this is a fairy tale. Do you want me to shut up and let you finish your English story in peace?”
She shook her head quickly and gestured for him to continue.
“Princess Katlina was by no means happy, as each passing day brought her nearer to the dreaded event. Sadness became her constant companion, perched on her shoulder like a pet bird. A finial portrait of the princess was commissioned only a week before the wedding, and this only added to her misery. Later, she put on her finest things and sat down in a silver chair to await the artist.

The artist soon arrived, and introduced himself as Christophos. He was not the usually appointed painter, and the princess found herself quite taken with him. As she began to pester him with questions, Christophos began to relax, and soon, he began to enjoy himself. Eventually, Princess Katlina told him of the upcoming event and of how much she wanted her freedom. As he worked, the beginnings of a plan started to form in his mind.

Upon finishing, Christophos approached the little princess and began talking in a hurried whisper. He asked her to leave, to escape this life and go with him to freedom. He pleaded with her, begging her to leave with him.”
Chris stopped, put down his pencil, and closed his eyes.

“Well, what did she say? Does Princess Katlina go with him?!”
Not even bothering to whisper, or keep the impatience out of her voice, Katie asked for answers. He said nothing, but slid several sheets of paper across the table and whispered

“Only one way to find out….”
As she sifted through the stack of papers before her, several caught her eye; a drawing of the princess, but there was something familiar about her face. There was one in particular that stood out from the heap, and it was especially good. Three drawings covered the heavy paper, all illustrating the unfinished story. The first was of the princess and her family with the city in the background, the second was again the princess only weeping and alone, and the final sketch was of a couple embracing. Princess Katlina in the arms of Chrostophos, there was no mistaking the artists’ smock he wore. Suddenly, Katie froze as realization swept over her like a storm-tossed wave. The names, the odd familiarity of the faces in the drawings, and, she looked up, the brilliant red that had covered her companions face.

“I’m Princess Katlina?!”
Her voice, no more than a whisper, caught ever so slightly as Katie gasped in shock. Chris nodded. She looked her friend of many years in the eye and saw hope and doubt warring for control as he barely managed to keep his expression calm.

“hold on, did you just ask me out?! “
Katie didn’t think his face could get any redder, but it did, changing rapidly from cherry red to a deep crimson.

“Uh yeah, I-I think I d-did. On second thought, I did.”
Chris looked at her, his silent eyes pleading with her to say yes. Katie took a deep breath to steady herself.

“To happy endings. And for the record, that was a yes.”
She smiled at him as she watched his eyes light up like the proverbial candle. Abruptly, his expression changed from one of pure joy to one of slight confusion as a thought crossed his mind.

“Hey Katlin, did you ever finish your English paper?”
Katie laughed and grinned wickedly, pushing her paper across the table for Chris to check.

“Only one way to find out.” 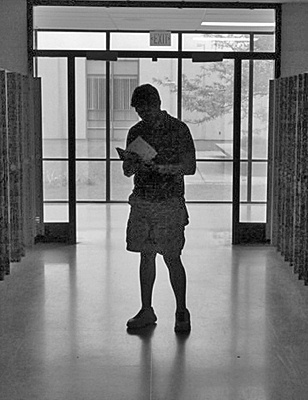 Favorite Quote:
“We accept the love we think we deserve.”
― Stephen Chbosky, The Perks of Being a Wallflower

View profile
This is sooooo cute! how adorable that he thought of that way to ask her out! what a classic!!!!