Not being able to sleep, Eden sat outside on the railing of her balcony, soaking in the strange dark blue colored moonlight. Gripping onto the cold metal, she swung her legs back and forth, the cool breeze brushing up against her bare legs and feet. The melatonin gummy she had kept in her mouth for the past few minutes had almost completely melted - the expired and almost rock hard gummy had made it impossible for her to chew. Wondering what time it was, she swung her legs to the other side of the railing and hopped down, peeking through the glass doors. 12:00 AM. It had officially been one whole year since the end of the world.

Knowing that memories of the event would flood her head any minute, Eden pushed open the doors and ran to the jar of melatonin gummies on her wooden nightstand next to her bed. She swallowed four more melatonin gummies and paced back and forth, desperate to be hit by a wave of drowsiness. One by one, her family’s faces had started to appear in her mind - her mom, her dad, her sister, her dog, her grandparents - her heart aching more and more with each appearance. Not being able to withstand the pain of seeing them, she hit her head with her fist over and over again, wishing that she could just reach into her mind and pull them out. She knew that she was lucky to have remembered their faces and have pictures left of them, but she still wanted more. Having pictures and memories just wasn’t enough. With her eyes brimming with tears, she tried tucking herself into bed the same way that her mother and father used to. She was never able to do it right by herself. Her eyelids started to feel heavy, feeling as if invisible strings were tugging on them, signaling that it was time to rest. She glanced over at her nightstand and carefully grabbed a framed picture of her family. Feeling extra lonely on this night of the full moon, Eden stifled a small sob, drifting off to sleep curled up in a little ball, tightly hugging onto her family picture.

Feeling a sharp pain in her stomach, Eden woke up in the middle of her night. With her eyelids half closed, she rubbed her stomach in circular motions. She suddenly felt another sharp pain, this time in her hand. She yanked her hand out of the blanket and used the bright moonlight as a guide to see what had happened. Her hand had a small cut, and the rest of her palm was covered in sticky blood. Ignoring the cold, she abruptly pulled her blanket aside and almost fainted at the sight of what she saw. Glass shards of all different sizes had ripped through her black silk nightgown, cutting through the flesh of her stomach and leaving her sitting in a pool of her own blood. She looked like she had just been dropped into a crime scene. Cold air traveled through the open cuts of her nightgown, but the warm blood surrounding her kept the heat inside her body. Stuck in a trance staring at the blood, she couldn’t move. Until the pain hit her again. Grimacing, she blindly scurried to the bathroom down the hall, hugging herself while hunching over, as if it could keep the blood inside her body. The nightlight in the bathroom was bright enough for Eden to see that the blood had stuck the nightgown right onto her cuts, and she groaned as she tried to slowly slip the nightgown off. The sight of blood had made her nauseous, making her gag each time she tried to look at the cuts on her stomach. She didn’t want to turn on the bright lights, which made her eyes sore, so she hopped onto the sink, inching towards the nightlight. After taking a close enough look, she realized that the cuts were not that deep, and sighed in relief.

After a painful hour of cleaning up the cuts and bandaging them up, Eden went back into her room, her eyes now adjusted to the dark, being able to avoid the trail of blood she had left in the hallway. The cold air wrapped around her bare body, and without the pool of blood to keep her warm this time, goosebumps trickled up her spine. She carefully put on a hoodie and sweatpants, and her body instantly started to warm up, as if someone had turned on a heater inside her body. Not looking forward to the sight of blood again, she avoided looking at her bed and dragged her feet to the living room instead. Feeling exhausted and overwhelmed, she laid down on the couch, pulling a blanket all the way up to her chin.

The soft, cool breeze slipped through Eden’s curtains, into her room, and through her blankets, sending tingles all around her body, telling her to wake up for the second time that day. Shivering and groaning, she pulled her blanket around her even tighter. She licked her lips, cracked and dry from the cold weather. They tasted funny. The bright sunlight seeped through her eyelids, and she tossed and turned in slow motion, her stomach sore from all the cuts. The couch felt wet underneath her cheeks and Eden got up as quickly as she could, worrying that she had bled again in her sleep. There was no blood, just something that looked like water. Licking her lips again, she realized that they tasted salty. She must have cried in her sleep again. And crying in her sleep only meant one thing - she had a nightmare.

“Eden, we love you so much” her parents looked at her with so much love, she thought hearts might start gushing out of their eyes.

No. She didn’t want to think about it. Her vision started to blur, and her knees buckled, sending her collapsing onto the floor.

“What are you talking about, it’s not time yet, we have to go get Harper, remember? You promised,” Eden's voice wavered, she grabbed her parent’s hands, trying to drag them towards the front door, calves burning and eyes watering.

Eden grabbed her knees, rocking her body back and forth, one hand on her head. She squeezed her head and pulled her hair as hard as she could, hoping the pain could distract her.

“Ten, nine, eight…” the sound of the TV had been drowned out by Eden’s sobs and screams.

“You guys promised!!” Eden screamed, her face flushed and tears streaming down.

She couldn’t do this anymore. She frantically got up and ran towards her room, bumping into the walls on the way. Blinking as hard as she could to focus her vision, she looked for her headphones. She laid down flat on the floor and reached her hand under her bed, feeling a thin wire. She pulled it out from under her bed- a knotted mess, those were indeed her headphones. She grabbed her phone from her nightstand and plugged in her knotted headphones, clicking on a random playlist. Anything to distract herself.

My feet are aching, and your back is pretty tired. With her shaking hands, Eden put up the volume as much as she could, and laid flat on her back. Her chest rising and falling rapidly, she could feel her fast heartbeat pounding in her chest. She tried to focus on the music.

The papers say it’s doomsday, the button has been pressed. We’re gonna nuke each other up boys, ‘til old Satan stands impressed. Wait. Eden stopped breathing for a second.

And here it is, our final night alive, and as the earth burns to the ground- Eden ripped her headphones out of her ears and chucked her phone at the wall. Sobbing, she ran out of the house - she needed some air. She ran out into the empty street and looked up at the sky, no longer blue. The clouds covered the sunlight and rain started to pour down. Before she knew it, she was drenched from head to toe. She paced back and forth on the empty street, taking deep breaths and shaking the tingling feeling out of her hands.

“Hey, you okay?” Eden stopped in her tracks. She hadn’t heard a voice besides her own in more than a year. 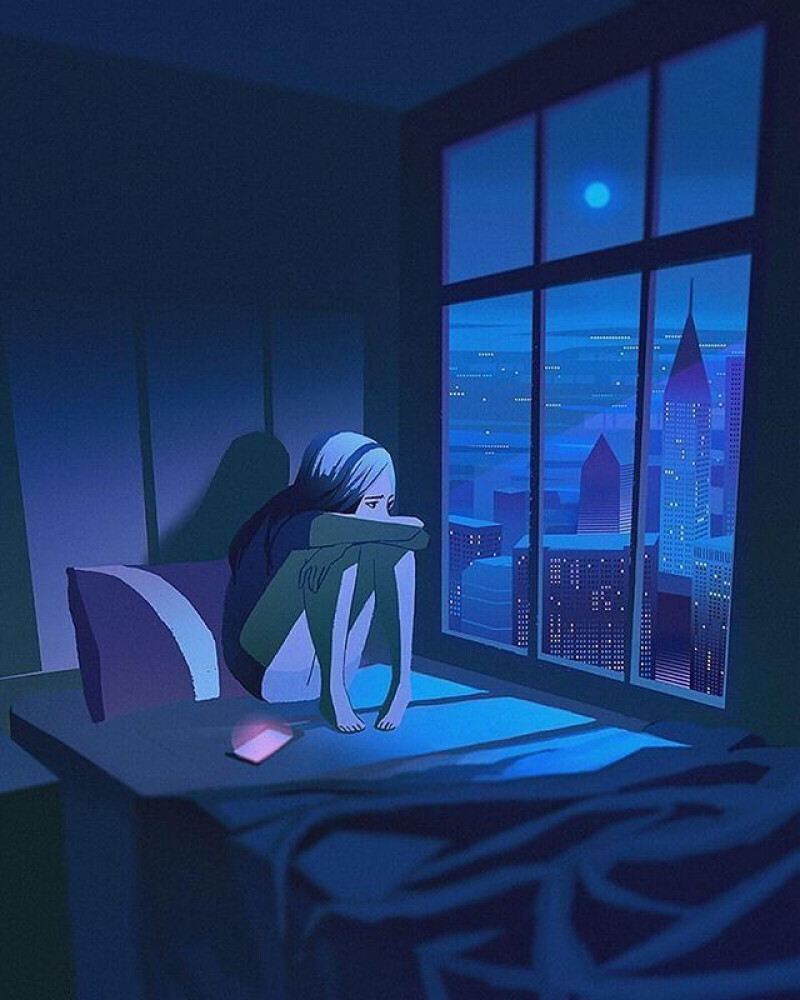 View profile
@Crazywolfiegirl2 That means so much!! Thank you for reading my short story!! :)))
katieko SILVER said...
on Sep. 17 2021 at 9:55 am
katieko SILVER, East Brunswick, New Jersey
5 articles 0 photos 3 comments

View profile
This is amazing!!! It should definitely have been editors choice.