How the wolf got his howl | Teen Ink

How the wolf got his howl

Favorite Quote:
"Wow...I epic failed that one didn't I?"

Deep in the Japanese forests were the homes of many animals. The blue jays, water snakes, raccoons, foxes and the bears could all make their own music with their howls, screeches and chirps- except for wolves. One day Kaage the bear, Miki the blue jay, Udo the raccoon and Miyoko the fox were going to get all the animals together to greet the full moon tomorrow night with their wonderful sounds. As Kaage was going to find Kazuki, one of the many wolves, he heard whimpering. The bear stopped in his tracks, putting his ear closer to where the sad noises were coming from. He slowly crept through the bushes, only to find Kazuki himself sitting at the edge of a cliff, looking up at the setting sun. Kaage came closer, tears dropping onto the earth as they were rolling down the wolfs’ fur. “What’s wrong?” asked the bear. The wolf looked up and dried his tears, saying in a trembling voice “I want to greet the moon, but I cant. None of us wolves can. I want to make a sound also to sing to the moon but I don’t know how.” With that, tears started to swell up in Kazukis’ gleaming yellow eyes. Kaage looked at the ground for a minute, thinking of an idea. “You will greet the moon tomorrow night!” The wolf was startled at this statement, but he kept listening. “Udo, Miyoko, Miki and I will help you learn to make a sound.” At that, the great big brown bear ran into the lush green bushes telling the others of his wonderful plan. The wolf walked home slowly. The stars started to shine brightly as he found his way to his den. As Kazuki plopped down on the floor, he instantly fell asleep, dreaming if this idea would ever work.

At sunrise, everyone came to Kazukis’ den. It was hidden in a mesh of bamboo and twigs, hard to find without daylight. He awoke, finding his friends waiting for him outside. “Alright kid, let’s get started” stated Udo. The elderly raccoon was going to teach him first. “The proper way to greet the moon is by hissing. Press your tongue lightly against the roof of your mouth and breathe softly.” When Udo made the hissing noise, Kazuki was intrigued. “Now you try.” The young wolf tried and tried, but all that came out was an odd and rude sound. “Open your mouth young one.” Udo peered into the wolf’s mouth. “Ahh, your tongue is much to wide for my sound. I’m sorry, I have failed to teach you.” And with that, Udo trotted off. Next, Miki was going to teach Kazuki how to chirp lovely serenades. “Just open your mouth, make your lips into an o shape and blow. That’s the way to do it.” Miki whistled a beautiful piece while flying around his head. “Now you try!” Kazuki blew and blew and blew, but all that came out was his breath. The blue jay took another look at the wolfs mouth. “Oh my, your lips are much to big. I am sorry, but you just can’t do it.” Miki flew off, again leaving the wolf alone. Lastly, Miyoko was going to try to teach Kazuki how to yelp at the moon. “To please the full moon, you should make a noise at the back of your throat. Like a high pitched yell, but shorter.” Miyoko make her yelp sound that echoed through the bamboo and wild flower bushes. Again, Kazuki tried to make the yelp sound at the back of his throat. He pushed himself so hard, tears were coming to his eyes and his throat turned a bright red. The poor wolf collapsed from exhaustion after many tries. Miyoko helped him to his shaking paws, telling Kazuki that they may work on it later. The wolf walked off miserably to his usual getaway. He sat on the edge of the cliff, watching the sunset, breaking down into tears. Kaage came to find him again crying. The big bear noticed that his plan had not work. As Kaage sat down beside the weeping wolf, he landed right on Kazukis tail. He yelled a loud painful screech, which sounded like howling the wind does. “Arooooo!” went the wolf has he snatched his crushed tail from underneath the bear. “You…You made a sound! You just made a wonderful sound! Do it again, but even louder. The young wolf made the howling noise, but even louder. It echoed throughout the whole forest. The bright florescent full moon had risen during Kazukis long howl. ‘I-I pleased the moon! The moon came with my help!” The wolf again stood, puffing his chest out. Kaage stood up too, and together the roared and howled at the moon together. That is how the wolf got his howl. 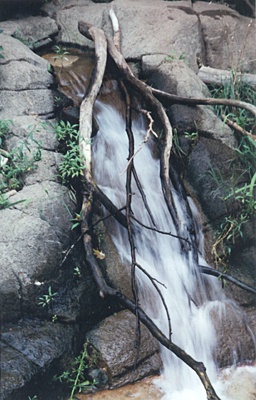 The author's comments:
Yeah..You could say it's original. I did this for my Geography class and I got a good grade on it. My teachers think I'm a really good writer, so why not post it?
Post a comment
Submit your own