Ian stared at the computer. Slowly he rubbed his own eyes and continued typing his essay. Sighing, he got up and walked towards the kitchen to get more coffee for my energy. The time was already past midnight and everyone had gone off to sleep except me. The homework was more urgent. Ian just couldn’t afford another detention with Mrs Denton. The more detentions he received, the more chances of being suspended.
Dragging his feet along, Ian made his way slowly back to his computer. Slowly tap, tap, tapped away at his computer. Suddenly the computer flashed purple. No, he thought, I must be dreaming. Then, suddenly the computer again flashed purple. Suddenly, a blinding light issued from the midpoint of the screen. “Aaah,” screamed Ian, “what’s happening?” An invisible force suddenly rippled through the room and as Ian stared around the room, everything disappeared. Ian stared in disbelief as his clothes changed and so had he. He no longer was that teenage boy sitting in a chair. He had seemed to have adapted some sort of awesome power that flowed through his veins and was under his very own skin.
“Cool,” exclaimed Ian, “what is this stuff.” He stared at his own hands that had turned a strange shade of purple. Suddenly, getting a grip on his surroundings, he looked around and couldn’t believe what he saw. Everything was different, out of the ordinary anyway. Like the ground was grey, the trees and nature were a strange red whilst the sky itself wasn’t normal either. The colour was an odd green. What was going on, thought Ian, this world is definitely not normal. Just then, a giant animal leapt out of the tree. This wasn’t like any animal he’d ever seen. The animal seemed to be a cross between many animals in the ‘real’ world.
Like the head seemed to have a head like a cheetah, but had a bullfrog like mouth and had pointed ears like an elf while the body was stripped and had a resemblance of a deer. To match this bizarre appearance was its tail which was as flat and as round as a pancake.
Suddenly the thing lunged and the next instant, he had emitted a burst of energy from his fingers and had knocked the thing out. Looking around with a bemused expression on his face, someone behind him said, “Well, well, well, looks like the brat isn’t half bad after all.”
to be continued... 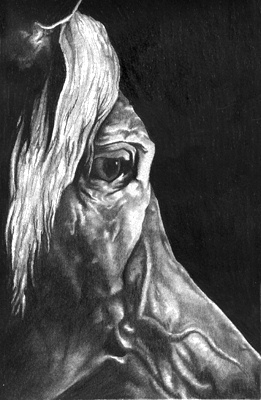 The author's comments:
if i told you, my secret would be out
Post a comment
Submit your own