The Man Woke up | Teen Ink

The Man Woke up

The man woke up to find he did not know who he was nor where he was, all he knew was that he was in a desert. He felt he needed to know. He felt he needed to fill the uncertain emptiness in his mind, so he got up and began walking east, towards the sun, for he could tell it was morning by the chill in the air. He walked until the sun was at his back. Sun beating down on his unstable self, the scared, little man walked all the day long until he wished never to see the harsh, unfriendly, unforgiving desert again. Finally, he came upon a village. So relieved to be somewhere, anywhere, the solaced man resolved that this would be his home now. Giving himself a name that felt smooth on his tongue and smooth on his heart, he entered the village.
The village clothed him and bathed him and gave him a shanty on the outskirts of the town. The thankful man was content. Content until he realized his new home was on the very shores of the treacherous desert he so very dearly wished to avoid. Every morning, he would wake to the sight of this desert, and every night he would drift away in sleep on it’s sands. His lost memories would haunt and madden him, he knew. So he resolved his heart. He would become a friend of every man, woman, and child in the village. Then and only then, would he be able to ask for a new house, away from the dreaded sands of his past lifetime.
So the lost man worked. The people were impressed and grateful for his service, and they commended him. One day, an Elder watched the strange man fix his broken roof. Filled with gratitude, the old man asked, “What can I do to repay your kindness?”
“Nothing,” the occupied man replied. “I am just happy to talk to everyone like this. It is lonely living so far away on the outskirts of town.”
The old man, wise in years, understood what the solitary man was implying, and, being a gracious soul, took his desire one step further.
“Young man, as you might have heard, our village recently had a war with a neighboring tribe. We lost nearly all our strong men in the fighting. My daughter is young, and I wish for her a husband just a vital as she. You have proven yourself worthy of her, and I would be pleased to have you as a son-in-law.”
The overjoyed man readily agreed and was married to the Elder’s daughter, who was as beautiful as she was kind.
Years passed. The happy man had many children with his lovely, understanding wife and was the idol of the village. He could not be more content.
But he could. Songs of the desert plagued his dreams and the sights of the desert taunting his waking hours. Worried at seeing him so agitated, his wife asked for the reason to his discontent. So the blighted man told her how he had found himself, half buried in the desert, with no recollection of who he was or where he was. His wife listened without a word. Then she spoke to him.
“The mysteries of the desert are endless and full of pain,” she said. “I understand the anguish you must feel, but please, for the sake of your family as well as your own, do not go digging in the sands for things that are better left undisturbed.”
But the restless man could not listen to her, so haunted was he by the unknown abyss of his past. That very night, he settled to go and return to the spot on which he first woke. Only there, he was sure, could he find the answers he wished to seek. His wife was waiting for him at the door.

“I will return in a day’s time,” he promised, kissing her tear-stained face. With this, he left.

“That is what you say,” his wife whispered to the darkness. “But I fear you won’t.”

The determined man started on his journey as the early morning dawned. With the sun at his back, he headed west, as he had headed east, towards the sun, those many years ago. When all was done, east-ward would be his home.

All day, he trudged through the sands, his resolve pushing him ever farther west. Morning turned to evening and still he went farther. Only when the sun was low in the sky, did he rest. It would be night soon; he could not be far. Turning his head to scan the sands, it was then he saw the patch of black shadow. It was a pit descending into the earth. Excitement filled his chest, as the apprehensive man bounded over the dunes to the pit of shade. Committed to his journey, he entered the pit. It was dark. Very, very dark. As his eyes adjusted, he saw a dim light and walked towards it. It was a large, earthen room. At his feet was a little lamp.

With an enormous crash, the lamp exploded and an almighty Jin, a Genie of the lamp, rose from the smoke.

The terrified man shouted in fear, “I wish to regain the memories I have lost!”

“I will return them to you, again, if that is what you wish.”

The amazed man’s fear dissolved as he realized this Jin held the answers he had been searching so long for.

“I wish to regain all the memories I have lost!”

All the memories of hurt, pain, anguish, and betrayal flooded the man’s head as they had many times before until he was drowning in them.

The man was a cursed man. Doomed to forever come back to this point.

“Stop!” he cried in despair. “Stop it! I wish you would take all my memories away!” 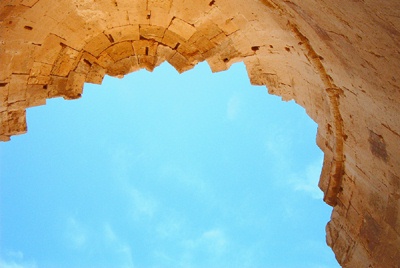 View profile
Fiction
A Trip With Santa Claus
By Anonymous

Favorite Quote:
"Happiness come to those who wait"

View profile
This is an AMAZING story. l Love the sense of mystery the desert creates. the ending is just perfect. I am speechless. I absolutley enjoyed this piece.GREAT work!!! :) Please check out my story called Precarious Pursuit. Just search it up in the search bar.