Favorite Quote:
If you cant rock it, dont even bother trying.

I thought I was having a nightmare.
I was wrong.
The walls were breathing, swelling, crowding me, and shrinking, adding to my feeling of pure lonelieness, because I was alone. The lights were dim and I heard laughter. Maniacal laughter.
The walls were laughing at me.
Suddenly, in the dark hallway, I saw a door. The door wasnt cheerful, it had bars on the window, but perhaps it was an exit. I ran to it, a glimmer of hope clearing the dank hallway and glowing in my soul, but the closer I got, the smaller the door looked, until I got there and the door had disappeared altogether. I sat in the middle of the floor and cried. Suddenly, I heard footsteps and I lifted my head. A young woman, it seemed, was wandering around. She was dressed almost like a bride, in a white gown that hit the floor. Her dark hair flowed in a soft, wavy waterfall to her waist. I called out to her and in an instant she was at my side. I looked at her and shuddered. Her long, bony hands gripped my shoulder and I began to bleed. She had no eyes. Her lips were blue, and she was whispering
"Let the cold of the grave hold the intruder tight, let the light of the heavens go out forever in the intruders eyes. Let the breath snatched from my home claw its way to the surface and travel to the dusty throats of those long past, and let the scarlet life grant me my eternity!" By the end, she was screaming, a ghostly wail that chilled me to the bone. She released her hands and licked her fingers. She drew sustanance from the blood. My blood. Suddenly I couldn't breathe. My legs buckled and I fell to my knees. The woman melted away. The last part of her to fade were her stunning green eyes. I couldn't breathe, couldn't think. I tried to scream, but I couldn't. All I could hear was her laughter, and my world went black.
I thought I was having a nightmare.
I was wrong. 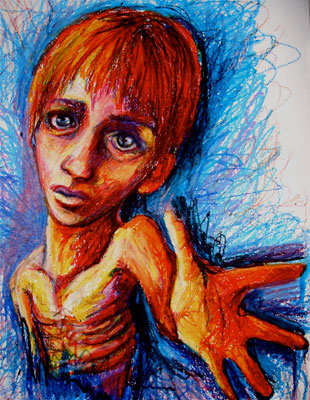 The author's comments:
Dark, rainy Wednesdays make me write these kinds of things. Crits are great, pwease!
Post a comment
Submit your own