There’s a very fine line that separates insanity from reality, however there was a much thicker wall of glass and mortar keeping me from him. I suppose that’s one of life’s quirks, a distinction of the mind so fragile it often goes unseen, must be delineated for the world with crudely constructed walls of cement and hysterics.

There isn’t much I can remember from my childhood, it all seems to blend together, masked in a hazy film time has inflicted. But I distinctly recall that it was soft. Take from that what you will; I’m afraid time has put a damper on my memories. I never really had a family; that is for certain. My parents had left me long, long ago, so when I was informed that they were gone, permanently this time, there was little I could feel in the way of sorrow. I grieved, but more so for me, as there was no undoing this sentence to loneliness and seclusion. I think I loved my parents, but it’s hard to learn to love two people you rarely saw. As I grew older, those who I saw most often became my makeshift family.

I spent much of my time at the local institution, talking to those who had similar and not so similar stories to mine. I spoke with those who had stories to tell, and if they did not, well I always did. None of us had grown up with our parents, so instead we grew up with each other.

We celebrated holidays together and took short day trips to the beach on occasion. Socializing was difficult for me at first, and in all honesty, we were all forcibly pushed together; it wasn’t through our own volition. However I soon became accustomed to the pattern of meeting new people, hearing from them, sharing bits and pieces of my life. Some of us seemed to understand each other immediately upon meeting. Others, like Gerald, were impossibly different. I liked Gerald though; he was a very tall man who slouched to soften his distinct height difference from others. I told Gerald he’d develop scoliosis, but he said he had more important things to worry about. Gerald never failed to make me laugh.

Gerald and I always met twice in a small, too-bright, room with a noticeable divider down the middle, he on one side of the wall, myself on the other. We talked about politics and celebrity gossip, Motown classics and what we had for dinner. We played a game too. The goal was to figure out which one of us was the crazy one. In order to win the game, you had to prove that the other was insane, and I always won. But we played anyways because it entertained us both, as well as the guards who always kept watch.

Perhaps they were bored, or maybe they liked to keep score, but the guards always scribbled down notes during our game. It must have been fascinating in a way, to see how two men, so alike on the outside, could differ so greatly internally. Gerald’s logic was hard for me to grasp, it was actually quite irrational.

I remember our last round of the game quite well. Gerald sought to prove himself sane through an experiment. He appeared gaunt, his lack of width only further pronouncing his excess height. Then, two items were placed in front of him. One, a plate from dinner, and two, a glass of water. He looked at them both, and then promptly ignored them. How could a man, clearly suffering from hunger and thirst touch neither? If that was his way to win the game, it certainly wasn’t amusing, and I had begun to feel disturbed by the lengths he’d go to win. His refusal to touch them perplexed me, so I asked him to explain himself.

“I am equally hungry as I am thirsty. The plate and the glass are the same distance away from my reach. As a man of logic of rationale, how am I supposed to decide which to take first?” he said.
This made no sense to me. Was he supposed to just sit there in the middle instead? I wanted him to make a choice. But he seemed steadfast in his ways. Perhaps there was some rationale behind it, but as a whole the idea was absurd.

“Gerald, this means I win again you realize.” I had told him.

His response was quick. “I’m not so sure it’s winning.”

“Mhmm, yes. I suppose that’s true. Then, I wonder, it’s not much of a game is it?” he whispered this time, his voice clearly losing strength with each word.

“Why is that? We have fun don’t we?”
And then Gerald responded so quietly, it almost seemed like the voice was coming from inside my mind. “Yes, but it’d be a better game for two people, don’t you think?” 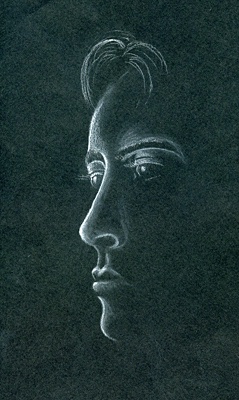 The author's comments:
This was one of my first attempts at magical realism but it ended up being less magical and more medical.
Post a comment
Submit your own

I'm not sure if you read my description but I was attempting to write a piece of Magical-Realism but it didn't really fit.

If you have time/interest would you mind reading my other pieces- Atlas and Poetic License to Kill? I'd appreciate feedback on those two especially.

If you have any writing you'd like me to read, I'd be glad to do so.

View profile
The story was ok, but why is it in the Sci-Fi/Fantasy section?