After I had just barely turned sixteen, I had heard strange rumors of an entity that would choke travelers. My older brother Tom and I were sent to deal with it, for it was scaring off prey.

The ghost was near where the town of Elkwood is now located. The land was covered in a thick, dense bush and we had to pick our way carefully to ensure we did not become lost. Tom was not used to such conditions and became quite frustrated, tearing away any branches that were in his way.

“John, are we near the ghost?” Tom asked bitterly. I paused for a moment, looking around me. The cold finger of fear brushed down my spine. I could now see my breath before me, though it was not fall or winter. I turned to Tom, whose eyes flickered about like a roulette ball on the wheel. A bulky transparent figure came toward us. Its head hung strangely to one side, burns circling its neck. The cold became worse, freezing the nearby puddles. I buttoned my coat, wrapping my cloak around me. The hooting of the owls ceased, an eerie silence falling over us.


Suddenly, Tom began to choke, pressed against a tree. Immediately, I knew this ghost was powerful and I needed to be cautious.

“Ghost! Why are you here?” I questioned. The ghost loosened its grip on Tom, allowing him to take in gulps of much needed air. Its hollowed eyes fixed on me, studying me closely.

“Died here, I did. Buried my body nice and close to the trees.” He replied, his voice deep and rumbling.

“Why weren’t you buried on hallowed ground?” I asked.

“I killed my wife. She was with another man while I was workin’.” He replied with a hint of sadness. I nodded, motioning my hand to Tom.

“If you will let go of my brother, I’ll listen to your tale.” I suggested. The ghost released Tom, who rubbed his reddening neck as he glared dangerously at the spirit.

“How did you find out your wife was seeing another man?” I wondered.

“She went to the tanner’s to pick up some leather. She was actin’ sorta strange recently so I decided to follow. I saw them kissin’ in the window. I ran straight home and waited for her to come back. I questioned her about it, and she lied to me! So, I strangled her. After, I buried her in the cellar. My neighbors heard screamin’ and came to investigate. They heard me shovelin’ and came down to the cellar. They brought me to this here forest and hung me.” The ghost finished his story. The ghost had a sullen look on his face as he stroked his broken neck. I felt sorry for the poor man, though Tom was unimpressed.

“So you take revenge on innocent people? Why not go to the light were you shall have some peace?” Tom snarled, venom dripping from his words. The area immediately became colder, the ghost frowning.

“Do ya think I haven’t tried?” The ghost spat.

“Think of a happy memory,” I said quickly. “That should bring you to the light.” The ghost thought for a moment, smiling blissfully.

“When I was a boy, I went walkin’. It was past curfew and I knew mother would be angry at me, but I didn’t care, it was worth it. The sun was just setting, lighting the sky up. It was like Heaven was revealing itself just for a few moments for all to see...” The ghost’s voice became quieter as it began to evaporate. The air became warmer, squirrels scampering across the forest floor. Life seemed to return to the area once again. 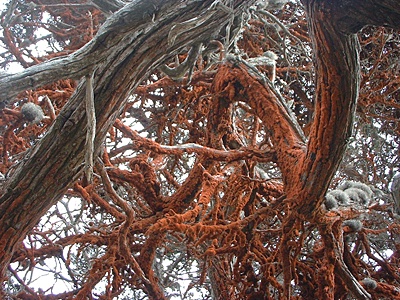 View profile
I loved this story! it always kept me waiting for more. Everything was exciting and it was greatly detailed.
Phoenix. said...
on Feb. 3 2012 at 4:03 am
Phoenix., Pittsfield, Pennsylvania
0 articles 0 photos 93 comments
View profile
you did a good job on this i believe keep up the good work!