In a World of Clockwork Hearts, Love Is the Same as Tragedy | Teen Ink

In a World of Clockwork Hearts, Love Is the Same as Tragedy

“Dysfunctional” is a good description of their relationship.

“A tragedy” works pretty well, too.

But Trip stopped trying to define what they have around the time it began. There's no comfort in giving it a name, a descriptor, when it’s just two people throwing themselves at each other as the world shatters and breaks apart around them.

Her flat is tiny, dark, and set firmly in the very worst part of town, but cheap. Trip hates it more than she ever thought it possible to hate anything, back when she was a naïve young doctor-mechanic moving from the suburbs to the big city. But it’s a place to sleep, even if it isn’t a home, and she sighs with a little relief as she steps in the door, dropping her coat on the stand in the entrance and toeing off her shoes. She’s a full-fledged clockwork prosthetics surgeon now, but as good at it as she is, she sees so much crime and pain every day that she sometimes wonders if all the talent in the world could make any difference.

“What is it this time?” she asks, lighting the gas lamps. Once, the question would have been sharp. Now even that edge is gone from her, stolen away by the sight of the notorious assassin in her sitting room.

Chuckling a little, Ash offers up a hand dyed scarlet with rivulets of blood. There's a wound near his shoulder, a bullet graze by the looks of it, but not serious. The only worry is the glimpse of whirring clockwork that Trip can see underneath the torn edges of proto-skin, the gears of Ash’s prosthetic limb showing through.

“You got caught?” Trip doesn’t wait for an answer, but drags her medical kit off the closet shelf and sets it on the table, sinking down next to Ash as she lays out what she’ll need.

“Hey, butterfly, don’t worry.” Ash’s voice is bright and sunny and means absolutely nothing, as good a disguise as any carnival mask. “Just a scratch.”

But someday it won't be. Trip presses her lips together to keep the words in, because regardless of what Ash says, she doesn’t feel the need to mother the entire world. Just Ash, when he does something stupid.

If that is rather often, then it’s Ash’s fault and no one else’s. He brings it upon himself.

The delicate tools are familiar in Trip’s hands, an extension of her fingers as she cuts away the torn proto-skin to get at the clockwork below. Gears and pistons move and hiss in endless motion, and Trip pauses for a second to simply watch. They're beautiful. The entire limb is beautiful, a creation that took her months to finish and attach. She knows each cog the way she knows her own face in a mirror, and it’s the work of a minute to adjust the gears back to their normal rhythms.

As she tinkers, Ash looks around her rooms with curious eyes, taking in the workbench in the far corner, the diagram of a bird’s wing hung on the wall above it. Two more prosthetic limbs made of intricate golden clockwork rest on the table, one half-covered in fake skin, the other bare and gleaming. In the corner, a clockwork cat bats at a ball of yarn, then rolls onto its side and curls up with a grinding purr. A mouse made of copper scurries around it, underneath the feet of a tiny clockwork soldier playing a flute. On the bench itself, a bird with gleaming silver wings hops and flutters, lifting ever so slightly above the wood before it settles again.

Ash smiles to himself, not the sharp grin he hides behind so often but a true smile, full of wonder. Trip has always been one of the best inventors, her creations intricate and unbelievably detailed in their workings. Lifelike, too, in a time when most prosthetic limbs are ugly and clunky and kill the host body more often than not. Ash is lucky that they met, because a man in his line of work can't afford to be seen as weak, like those with missing limbs usually are. With Trip’s, even Ash sometimes forgets that his left arm isn’t real.

The silver bird hops to the edge of the table, folds its wings, and chirps out the notes of a nightingale’s song.

“Wings,” Trip says suddenly, as though it’s an explanation. Her eyes are still fixed on her tools, replacing a damaged gear that wasn’t turning smoothly. “I'm trying to build wings.”

Ash knows. Trip has been trying to build wings for years, ever since Ash first met her. It’s a dream that Ash can't understand, the urge to throw oneself off a tall building and drift along with nothing underneath to hold one up. But it’s Trip’s dream, and that makes it precious.

He says nothing. Trip’s dream is to fly, while Ash’s is to be able to hold her back and never let her leave the earth.

It doesn’t matter. Neither of their dreams will come true any time soon.

The first time they met, the masks that they wore were too thick. Trip could only see the eerie assassin, and Ash could only see the angry lady surgeon. They crossed paths several times, Trip usually having to deal with Ash’s aftermath, and they often came to blows. But then Ash was injured—deathly so, he had thought at the time. He lost his arm, lost his home and his job, and was left with nothing.

Trip took him in and built him an arm out of copper and bronze, silver and gold, and stole his heart in trade.

It was a fair one, she thought, as Ash had her heart, too.

But Lord Blue still controlled the lower city, and Ash was still his man, no matter how many limbs he lost or how damaged he was. Trip was still a surgeon in the upper levels, consumed by her work with gear mechanisms and artificial limbs, and there was nothing between them, really.

Except that there was, and all the protestations or mistaken blows in the world couldn’t change that.

Now they exist in an odd sort of limbo, suspended between complete avoidance and a true relationship. Ash comes whenever he’s injured, even if it’s only slightly, and Trip drops everything to see to him. When Ash is patched up, his clockwork limb repaired and everything else in working order, they have an excuse to spend that single day together.

It’s not a healthy relationship, but they don’t think of it when they can it, and that makes it a little better. Instead, they only focus on the future, on when one day this will all be in the past.

“There.” Trip puts down her tools and reaches for the new patch of proto-skin to paste on. “It should work a little better now. I've got a new mixture of grease for you to use on the joints, too.” She seals the patch over the old, torn skin and sits back, touching Ash’s shoulder lightly. “You're done.”

Ash lifts his arm, feeling the familiar hum of the clockwork running, and pulls Trip closer—closer, closer, always closer, as though he can keep her here, with Ash, through willpower alone.

Trip smiles back at him, just slightly, because she wears a glare as a mask instead of a grin, and rests her forehead against Ash’s. “Ash,” she returns, and it’s an acknowledgment of all the things that neither of them can say. Ash wishes that it wasn’t, that he could leave Lord Blue and come back right now and be everything that Trip needs him to be, but it’s not going to happen soon. It might never happen, but that’s something he can't bring himself to think about.

He loves Trip, and Trip loves him.

But in this dark, dark world, where people have replaced their feeling hearts with clockwork, it’s not enough.

Soon, Ash will go back to Down-City, to Old-City, far below the more prosperous Mid-City and Up-City, and give his report to Lord Blue. Soon, Trip will return to her work, bent over tiny gears and pistons and motors as she tries to give humans wings. They will have to part, to take separate paths as they try to live out their lives in the filth and decay and rubble of a society that values clockwork over humanity. Love is good, love is wonderful, but it cannot bridge the gap between what they want and what they are allowed to have.

“Someday,” Trip whispers, as though she knows Ash’s thoughts, and maybe she does. She stands, and Ash stands with her, eyes serious. Trip doesn’t know if she loves or hates that look on Ash’s face, but she kisses it off anyway.

Their first kiss is always like turpentine, stripping away both of their masks and leaving their true selves bare to each other.

They hold each other, that night. Nothing more, but nothing less, either.

He leaves just as dawn begins to break over the city, pale light only highlighting the shadows. Trip stands in the doorway, wrapped in a shawl, and watches as Ash fades away into the tangled maze of hazy streets. No one can know about what they have together. No one from Ash’s world can know about Trip, and vice versa. It’s too dangerous.

But someday, when Ash is free and Trip can fly with clockwork wings, when there are no turpentine kisses and mistaken blows between them, then love will be enough.

Trip stands in the doorway, watching the rising sun, and whispers, “Someday.”

It’s closer now than it was yesterday, and that’s what keeps her going. 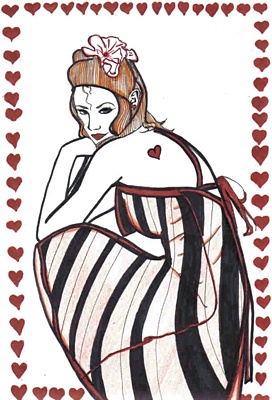 Favorite Quote:
"Do not let your hearts be troubled. Trust in God; trust also in me." -Jesus Christ

View profile
It's hard for me to pinpoint exactly what about this piece seems so alluring to me. Maybe the language, for example, it is so poetic yet concise. The clockwork gears of the prosthetic limbs and the strange inventions in Trip's flat remain fantastical but then they feel so natural, a perfect part of this world. And they're not even the focal point; that would be Trip and Ash, whose relationship you've breathed such life into that I can really feel the emotion, the sad feeling of wanting what you can't have. The descriptions are beautiful ("kisses like turpentine" was especially effective) and I'm honestly left with an odd mix of satisfaction and want to read more.