We were in the hands of our usual enemies, but this tribe was smaller. Nonetheless, there was little hope. They laughed and joked and stared at us in awe. Their eyes were wide with excitement and their taunting smiles made my juices run cold. They pointed out our many flaws and named off our true colors, as if our identities were trivial. Some of us were misshaped and some of us were unusually large, and we all came in different colors, but all of our characteristics meant almost nothing to them. The little beings had no mercy. We were safe in our cells and we held onto that hope until a group of us were thrown into the madness. Whether my people were green or yellow or red or blue; they had no hope of surviving. Some of my people were thrown to the ground. Some were stuck carelessly to the cabinets. We were all afraid of the mouths and of the small, sharp teeth that waited impatiently for us. One of our groups was released from their cage only to be squandered up by fierce, little hands and terrible, little faces. Their remains could be seen in the teeth of their conquerors. Their juices stained tongues and fingers and it was a horrible, catastrophic site. My jail was the next to be released when a bell saved my life. All the cells were dropped to the ground while the little beings cleansed their putrid hands and faces. I calmed down for a moment. I knew this was the end. I said goodbye to my friends and family, making peace with my short life just before my cage was busted open. We were all launched across the room. I ended up under the largest desk. I cringed as I watched my loved ones die and vanish in the hands of these little beings. One of our jails fell in front of the large desk and I read the label in pure disgust. “So, that’s what they call us,” I thought, indignantly, “Fruit Gushers.” 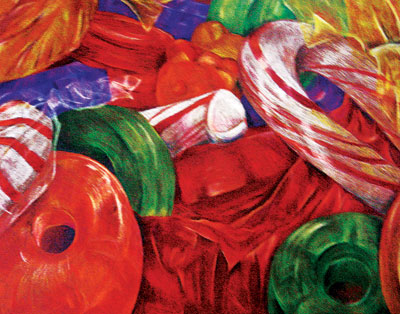 View profile
Fiction
The Wolf and the Rat
By Anonymous