They say the moon can make you a little mad. Maybe that's why I stop. I'm driving home late. Admittedly, I'm a little drunk from a solitary glass of gin I snuck in the office. Even when I hear the sickening sound of my rubber tires hitting something and squelching over it, I don't want to stop. I just want to drive home, take a hot bath, and go to sleep. But there is no denying the reality of the lump grinding beneath my wheels. I don't want to see the bloody mess I've created out of the once-­living flesh. I hate blood. It makes me feel faint. ­Besides, I don't want to acknowledge that as a result of my human error, I have quenched the spark of life.

I don't want to stop.

I have no reason to stop – no one has witnessed my would-be hit and run. But something makes me press my foot on the brake.

I get out of the car. The world is dark, illuminated only by my pale headlights and the silvery glow of the moon. At first I can't see anything. I round the car, almost convinced that my imagination was at play. That's when I hear the keening. It comes in bursts, sharp and pitiful. I close in on the sound.

There, I find the mangled form of a great gray wolf. Its body has been rearranged by the force of the impact with the car. It lies limp, and for a moment I am confused about the source of the noise. Then a small patch of fur detaches itself from the maroon mass of shadows. It makes a whining noise. Its eyes glitter in the moonlight. It's just a baby. Just a pup covered in its mother's cooling blood, but it's alive.

A lifetime of warnings about rabies and wolves and sharp teeth flash through my mind, even as I pick up the pup and wrap it in my shirt. It doesn't put up a fight. Instead, it snuggles against my skin as I drive home in the moonlight.

At home, I make a bed of newspapers in my sock drawer and put the wolf pup inside. It looks strange and wild in the dry light of my bedroom, but I am too tired to know what else to do. I resolve to take the pup to Animal Control in the morning, and then I sink into a deep sleep, punctuated by occasional squeaks from the wolf.

I wake up to the sound of a baby crying. The noise is harsh and foreign, as unfamiliar and unexpected as drywall crumbling in my bedroom. Dazed, I stagger out of bed. Finally my mind clears enough for me to realize the sound is coming from the sock drawer. 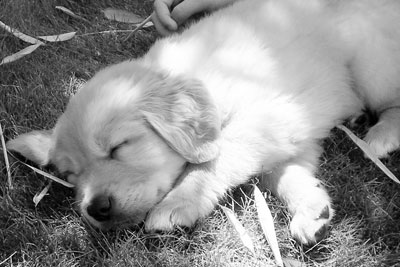 View profile
i really like this. i thought at first that it was you telling the truth (or were you?) and i thought, by the end of the story, that it was fictional. i could believe you hitting something with your car, but it being a wolf, and the wolf having  a puppy was a bit far fetched.    i actually have had some pretty bad expiriences with this though...   one time a bunny ran out in front of my car and i hit it. i could stop cause i was on the highway going 65 miles an hour, and i had no reaction time.   then, just this morning, i almost hit a squirrel that so foolishly ran in front of my car. i was going slow enough to let it pass though.
GreyGirl ELITE said...
on Sep. 17 2013 at 11:40 pm
GreyGirl ELITE, Pohang,Kyungbuk, Other
170 articles 122 photos 391 comments
View profile
thanks so much :D
DeathOfAStar GOLD said...
on Aug. 9 2013 at 7:48 am
DeathOfAStar GOLD, Kailua, Hawaii
11 articles 1 photo 70 comments