“I’m not even joking – let me in.”
Shaking his head, Dr. Junpei creaks open the door to the lab. “Sir, you can’t be here.”
“That’s my daughter in there.” Veins furiously stick out from the man’s neck and shaved head. “I want to know what the hell you’re doing to her.”
The doctor eases out, shuts it carefully behind him and faces – well, cranes his neck to look up at – Oscar. “We’ve explained the procedure to you several times.”
Lieutenant Oscar knows this. Still, he stands stubbornly in the hallway, enormous, tattooed arms crossed. “I insist on being in the room.”
When Junpei squints his eyes in confusion, they might as well be closed. “We can’t just –”
“Yeah, not asking.”
Junpei sighs. He does not want anything to jeopardize the experiment, but doesn’t care to endanger any American-Japanese relations either.
“Come with me. I’ll have you wash your hands and give you a surgical mask.”
“Wonderful. Tell them not to start without me.”
Junepei sighs, speaks into his walkie-talkie.
After this is settled, Oscar stands in the lab full of four unconscious subjects, his comatose daughter, and dozens of Japanese scientists. The people dawned in hospital gowns lay in their gurneys just outside of cat scanners. His daughter has the same setup too, although she’s in a full blown hospital bed with more significantly wires coming out her.
“We’re ready.” Junepei sends the scientists scurrying into positions, having Oscar question how so many people could take orders from a man of Junepei’s stature.
Then he remembers the impossibly short scientist has Louise in the palm of his hand.
“If you could, you know, tell me what they’re doing as they’re doing it…” Despite the drill sergeant tone in his voice, Oscar is nothing more than a concerned father.
“Of course.” Junepei secretly wishes this American wasn’t so difficult. “The subjects have already taken supplements to synchronize their sleep patterns. We’re about to give put them in Dysanesthesia, paralyze their entire bodies accept their forearms.”
“And that’s so they can write down what they’re dreaming about?” Oscar wonders why that has to matter. He doesn’t ask, he knows, and is irritated by it. All he wants is Louise back.
“Yes. Your daughter simply needs the extra kick.
“Everyone, on my mark…Now,” he adds, speaking in Japanese to the scientists. They insert the liquid into all five subjects’ necks, simultaneously.
Oscar’s eyes wander around the lab. The four professionals being sent into his daughter’s subconscious include an elderly female psychiatrist, a German mediator with grey hair to his shoulders, a 6-8 Jamaican oneirologist, and the young, beautiful and wildly famous Australian Lucid Dreamer.
Scientists run about the lab, placing electrodes over the subjects’ heads, in slightly spooky synchronization. “We’re about to send 40 hertz of electricity to their brains, so they can reach lucidity in their sleep. The anesthesia will take a few minutes to sink in, so we’re going to wait until then.”
“You’re telling me that she’ll be fine, that all you’re doing is looking for what she heard on the train?”
Junepei shakes out his black, put-together hair before he says anything. “You must understand, Shinri-Gaku is an incredibly dangerous cooperation. They’re so mysterious, we don’t know why they’ve resulted to violence to get the Computer, but we’re hoping if we find out what she overheard, we’ll be able to keep anyone else from getting hurt.
“Your daughter is in good hands. We most likely won’t wake her up, but her body will gradually recover as we look for what we need.”
Oscar nods, understanding yet terrified.
“Dr. Junepei, they’re paralyzed.”
He directs his attention toward the subjects. “Wiggle your fingers.”
The subjects do so, again, so in sync it gives Oscar goose bumps. The scientists place pencils firmly in everyone’s hands, and notebooks on their stomachs. They then place the hands above their notebooks.
“Give them the current.”
The man closest to the switch obeys.
“Louise Oscar, Janet Rockfeld, Geoff Dollborg, Derice Clarke, and Alyce Cummings,” Junepei directs. “Write down everything you see, feel, and – oh, God.”
Barely five seconds have passed – they won’t reach 40 hertz for at least thirty – and yet one by one, they all start to write.
“That’s, oh my God…” Junepei looks up at the scientist closest to Oscar’s daughter. “Well, don’t just stand there! What is the girl saying?”
The man sprints to the back of her bed, reads off of her paper: “Um, it says ‘I’m driving at night…’”

Louise
…and I’m gonna die, oh my God I’m gonna die…”
The wheel, I can’t get a grip on this wheel. It’s like it has a mind of its own, just forcing me on a deadly rollercoaster of banana peels. In the dark. Blindfolded. I’m panicking.
I can’t see anything, damn it. No moon, no stars, nothing but the low-beam headlights barely guiding me ahead. Thankfully, I’m not going too fast, so as long as my possessed car doesn’t take me off the road –
OCTOPUS!!!
Jerking the wheel and slamming on the gas – brakes! I meant brakes! – I shriek like a demon is on my windshield. The slimy monster stares at me with two beady, marble eyes poked into a file-cabinet-sized head. As we spiral down the road, its fleshy tentacles grip tighter to the sides and hood of the car. And yet my foot is still on the gas – come on!
The car finally, after switching to the brake and flipping over a few times, skids to a halt. The colossal invertebrate looks more relieved than I am. Flipping on the lights, I throw my head over my shoulder, and – no, I… God, no…
I squirm out of the driver’s side, to the back seat, sit in the middle and cradle the corpse.
“Henry…come on, you’re not dead. You’re not, you’re not…” I just keep babbling, stroking his beautiful face, his blond hair muddied with blood. “You can’t…are you serious? Henry, you’re not funny. You’ve never been funny. Your sense of humor is disgusting and immature and predictable and Henry please wake up I’m sorry I’m sorry I’m so sorry PLEASE!”
Sobbing into his chest, I clutch onto him like my life depends on it. It does. “This is so stupid…so stupid… Henry, I can’t even drive and I managed to kill you. I didn’t mean it, I didn’t know what I was doing...I want to be dead too, I really –”
I freeze, abruptly look down at my hands, arms, legs. Not a scratch; I’ve come out of this accident completely and utterly unscathed.
Something monumental, earth-shattering, unfathomable and basically impossible clicks into place:
I can’t drive. 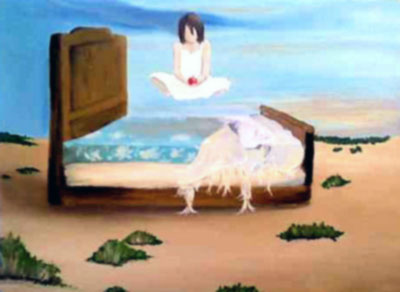 This is the beginning of a 10,000 word story I wrote for Creative Writing. Thought I'd see what people thought of it :)