Prime Minister Christopher Thatcher sat at his desk, fidgeting in his black leather chair. He took his pencil and started tapping it on the desk, something done only when he was nervous. With his other hand, he ran it through his short, black hair Thatcher looked at his watch. It read 9:30. So he isn't late. God, time goes slow when you're waiting for something. Suddenly the small intercom on his desk buzzes. Before the secretary even gets a word in, the Prime Minister pressed the button on the intercom and spoke.


A few minutes later, there's a knock on the door, and a man in a gray suit and expensive shoes walks in, holding nothing but a small book. Thatcher motioned for the newcomer to sit, and started to speak.


The man in the gray suit, named James Rose, nodded and sat down in the chair opposite to the desk. His mouth began to move, but stopped, and Rose sighed deeply.


“Mr. Thatcher, how long has it been since our search began?”


A little annoyed by the question, the Prime Minister answered.


“It's been about a year and a couple months. Why?”


Rose avoided the Prime Minister's eye. “Our sweep of the eastern side of the country finished last month, as you know. The Spaniards and Canadians have been a great help to us, but sadly, we have not found much. Out of all the states we cleared, we have only found one survivor. But he's in critical condition. Been in a coma for a week.” A blanket of silence fell onto the scene. It hung there for a full minute, and was swept away by Thatcher's voice.


“I'll pay for his treatment personally if I have to. This man won't die.” The blanket returned.


Rose cleared his throat, a crackly sound, and fingered the book in his hands.


“When we found him, he was clutching this journal.” Rose held up the battered little volume, and handed it to the Prime Minister. “Apparently, he had been recording a daily account of what happened in his day. He began writing in it a few weeks before Adam's takeover. Once New America had been established, his entries got darker. He obviously didn't like the new leader.”


Thatcher's brow furrowed. “Neither did anyone else,” he grumbled. He thumbed the journal open, flipping the pages back and forth. Christopher looked up towards Rose. “Has anyone else looked through this?”


Thatcher breathed a sigh, letting years of curiosity off his shoulders. This book may very well, hold the answer to what happened in that God forsaken country. The Prime Minister nodded at Rose. “Thank you, James. Keep me posted, especially on the survivor's condition.”


Thatcher turned his attention back to the book. He didn't notice the sound of the door closing as Rose left the office. He was transfixed by the journal's cover. It seemed to tell a story of its own, with its burned edges and dusty pages. Thatcher saw the fall of New America through the cover, and with a burst of courage, he opened the book and began to read.

I finally got that raise I've been shooting for. My dang boss finally recognized me and now I'm getting a bit more. Hopefully it'll help us last a little longer so Cassy can find a job. Same with David. He's turning 16 soon and he'll need to get a job himself so he can buy a car. God knows we need one.


President Arnold's just been arrested by the FBI. He was found to have ties with the Russian and Italian mafia and is guilty for ordering the murder of that Fitzpatrick woman. Crazy, right? This whole country's tearing at the seams, what with the crime wave hitting the east coast, and the economy in shambles. We might have to move sometimes soon. Cutting corners is pretty much mandatory, for businesses and homes right now.


We're not just moving neighborhoods, we're moving out of the country. Some lunatic named Thomas Adams just took over as president. The vice president is dead, and Adams is saying not to worry. Makes me laugh. They've got a whole army out there on the streets, fending off protesters, throwing the more violent ones in jail. I'm just curious as to what the lunatic will do next.


He says that he'll “change the face of America, transform it into something amazing”. Even without transforming the country, Adams made history.


Prime Minister Thatcher exhaled and closed the little journal. Although it had information, it was just a journal. Nothing more than a man's daily life written out in blurbs. They needed details. They wanted details. The world was aching for them.


As Thatcher was standing up to leave the room, the intercom on his desk buzzed again. Lazily, he pressed the button on the machine and spoke. 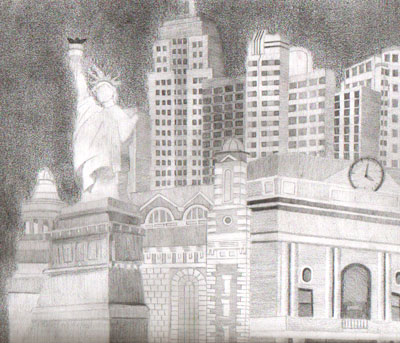 The author's comments:
Being fascinated by dystopias and the nature of man, I wondered what America would be like as a fallen country. So, I wrote out my idea, and it formed this, a small bit of my current work.
Post a comment
Submit your own

Parker Sams BRONZE said...
on Oct. 1 2015 at 7:33 pm
Parker Sams BRONZE, Atlanta, Georgia
3 articles 0 photos 1 comment
View profile
Hey thanks! I haven't been on this website since I posted this bit 5 years ago, but I got an email notification saying someone commented on it. It's strange seeing my old writing, and kind of encouraging to see how far I've come since my high school days.
Olivia-Atlet ELITE said...
on Oct. 1 2015 at 3:13 pm
Olivia-Atlet ELITE, Dardenne Prairie, Missouri
325 articles 10 photos 1165 comments

Favorite Quote:
"But soft! What light through yonder window breaks? It is the east, and Juliet is the sun! Arise fair sun, and kill the envious moon, for she is sick and pale with grief.."-Romeo, from Shakespeare's Romeo and Juliet.

View profile
i just happened to stumble upon this story and i have to say, its a really intriguing idea! i liked this story a lot, and i hope there's more to come!