Favorite Quote:
“There is no greater agony than bearing an untold story inside you.” ~Maya Angelou

I am prisoner. Bound by ropes that will not break. I am in despair. Despair that I would never see my family again. Despair that my life would not be as long as I wanted. My mouth is unable to make noise, but my eyes are free to see. Free to see the disaster falling upon me. Free to see my beloved home falling away from my sight with every passing second. My captors sneer as they see tears fall from my eyes. I am confused. Why is this happening? I look around and see that I am on a ship. A ship that is out at sea. How long have I been out? I concentrate hard to see if I can make sense of the muddle in my head. I had been skateboarding down my sidewalk when suddenly a man had blocked my path. He was wearing a black suit and tie, despite the warm weather. As a tried to skate past him a sinister grin spread across his pasty white face, and he chuckled evilly. His teeth were yellow, and he had a small goatee. I tried to skate around, around him, but he grabbed my arm with a hand that felt like iron, and twisted it behind me. Wincing with pain, I attempted to kick him. He whispered in my ear with breath that made me wither,
“You won’t get away this time, so don’t try any funny business.”
I tried to scream, but a course cloth was thrust into my mouth. The last thing I remembered was a sickly sweet odor.

It is late. After wandering countless roads, we make it into a city.
“Boston!” Jonathan squints in the fading light.
“We made it!” I shout excitedly. “Who do we call? My parents are probably going crazy! But the police have to know what’s going on!”
Jonathan nods in agreement. “I say we call the police first. Who knows where those guys are. For all we know, they might have already stolen it.”
That thought sobers us as we walk to a payphone.
I break the silence. “It so loud and awake. It seems wrong after walking all those empty roads.”
Jonathan stops and grabs my arm, pointing to a building. I barely make out the letters on it. “The National Museum of..” I trail off as I see two black shapes creep around the building. “Jonathan,” I begin in a shaky voice, “the museum closed early today, because of the emerald. Are those guys--?” I let my question hang in the air. Jonathan peers into the fast coming darkness.
“Yep,” he confirms my fears.
“Quick, we need to call the police!” I start to run toward a house. Jonathan takes another look at the men, and one at me.
“You go,” he decides, “I’m going to keep an eye on them. If they come out before the police arrive, maybe I can stop them until they come.”
“But what if they catch you,” I demand. “Come on.” Impatiently I grip his arm and pull him away from the museum. Jonathan shakes me off.
“No,” He says firmly. “you go.”
Even in the dark I can see the determined look in his eyes. Sighing, I look at him pleadingly one last time, before turning around and dashing toward the nearest phone.
*****


I slam the receiver down in frustration. I doubt the police took me seriously. We would be lucky if they ever sent a guy to check it out. Eyes blazing, I storm back to the museum, completely forgetting about my parents. Jonathan isn’t there! I gasp, thinking the worst. Then I see him, crouched under a bush, only a couple yards away from the museum. I let out my breath, and crawl over to him.
“What are you doing?” I hiss.
He jumps, then relaxes when he sees it’s just me.
“Don’t do that! You scared me half to death!” He gasps.
“Sorry,” I murmur. “But what are you doing over here?”
“I thought it would be better cover than standing in the middle of the road. Did you get the police?”
Our conversation is interrupted when Joe walks past our hideout. Thinking quick, I stick out my leg.
“W-w-what?” He trips right over it, nearly crushing it in the process. Jonathan leaps out and stuffs one of our gags in his mouth before he can alert anyone else. I sit on his back, and try not to be bucked off. Jonathan grabs a heavy branch that was under the bush and whacks Joe over the head. His body goes limp under me. It gives me great pleasure to tie his wrists and ankles (tightly) together. I look at Jonathan and we high-five.
“One down, unknown to go,” I murmur.
“Yea, um, what now?”
Suddenly I spy something I hadn’t noticed before. A satchel!
“Quick, what’s in here?” I ask softly, ripping open the cover. I stick my hand inside and pull out something heavy and large. We both gasp, stunned. I was holding the emerald! Just then police sirens sound through the streets.
“They came!” I say in surprise. In a few seconds, the whole area is lit up and swarming with policemen. Jonathan looks at me, a smile a mile wide on his face. I look back at him, knowing my face is a mirror image.


I sit on my bed in my room, pen in hand. It has been a week since my ordeal with Jonathon and the emerald. The police arrived just in time to catch goatee guy and his men sticking a fake emerald in its slot. It turns out one of their guys knew how to break through the specific set of wires that they had captured me for. Joe had been sent out to their car with the real jewel in his bag. Goatee guy, whose actual name was Edward Skint, refused to say a word until he saw Jonathan and I standing by a police car.
“You’ll get what’s coming to you. Just you wait and see! Jail isn’t going to stop me from hunting you down--” His words had been cut off has he was shoved into a car.
Jonathan told his story and I told mine, our parents were called, we were thanked by the governor in public the next day. My mom and dad were still switching between wanting to keep me locked up for safekeeping, and hugging me everyday out of pride. I’m still trying to get a bigger allowance. I twirl my pen, thinking of what to write to Jonathan, who had flown back (free, of course). I hear my mom’s voice calling for me.
“Skye, telephone! It’s Jonathan!”
I smile, and crumple up my paper. 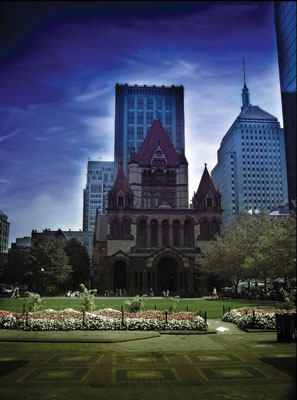 The author's comments:
I first started this story several years ago when I was trying to come up with a good hook. I forgot about it, but recently started working on it due to a writing assignment. It is finished, although I probably have much editing to do.
Post a comment
Submit your own