Through the Laughter | Teen Ink

Through the Laughter MAG

Laughter echoed against the white walls,joyfully coloring the tiny room with bursts of pink smiles and brightshades of delight. Six of us sat around an oak table, each engaging inour own conversations in four languages that sounded like a crowdedmarket. Asfaw’s ashy fingers traced Amharic characters with myhands while Venhence gently nudged me to help her find the right numberfor Bingo. Fatuma sighed at her misspelled English words. Muminaplayfully reprimanded the ever-raucous Mohammed. With our kindergartenactivities and kindred connections, it was astonishing to know that myfive beautiful friends had been starving in a refugee camp in Kenya onlya year before.

My friends were not the Feed the Children-typeAfricans who fill TV screens. Asfaw was a leader of a clandestineEthiopian political movement until he was exiled. His dignity diminishedwith each step away from his homeland, and he escaped a corrupt Ethiopiaonly to end up in the violent Kakuma camp in Kenya.

Venhence isthe product of the world’s negligence, with her withering arms andweary knee. She endured the Rwandan genocide as a Tutsi and her refugein Congo was short-lived. Fatuma, Mumina, and Mohammed are all SomaliBantu who were seemingly swept from the world’s agenda after amass genocide. Somehow, in the cramped quarters of our meeting room at adowntown church, my private-school priorities and teenage desires weremet with a startling revelation of humanity and its hope.

Since I was an infant, my parents have instilled the value oftravel and the world’s worth with trips across the globe, but as avolunteer in a refugee resettlement agency, I confronted situations andentire societies that shook my way of thinking. When I began attendingthe refugee elders group, I saw myself as their tutor, but instead Ilearned they were there to tell me the ways of their world and help mebetter understand my own.

Their English was broken, but Ilearned more in our weekly meetings than in any lesson at school.Besides gaining insight into the Somali home and speaking a bit of MaiMai, I began to understand and accept those around me. I achieved asense of unity and the awareness of the bridges such unity can build anda reassurance of the promise of people. Their actions during our gametime taught me that togetherness brings individuality by compromisingweaknesses in return for strength.

What had delivered them fromthe Janjaweed and other genocide demons was giving me a more confidentrole in leadership as a captain on the cheerleading squad. I saw intheir eyes the years of running, famine, loss and harassment, but theirexpressions of hope overcame the evil. They were, in fact, neverhopeless. When my heart was broken for the first time, I found comfortin the universal hope the refugees kindled. Their wise but understatedperception of their homelands brought me perspective and reason. Most ofall, their stories conveyed the message that has defined my destiny.Understanding, I learned, is a gift of sensitivity that assumes nothingbut accepts everything. I will never have Venhence’s tears orMumina’s scars, but I do have the ears to listen and the eyes tosee.

By volunteering with these refugees, I found a whole newworld. I learned to embrace all of humanity with dignity instead ofpriding myself on my ability to help. I discovered previously untappedparts of myself and filtered stereotypes from my mind. In a way I cannever explain, a few non-English speaking refugees spoke for me thatsummer. Before you understand the hope of something, you must first findthe heart in it. Through the laughter of Asfaw, Venhence, Fatuma,Mumina, and Mohammed, I found more than their hope. I found my own. 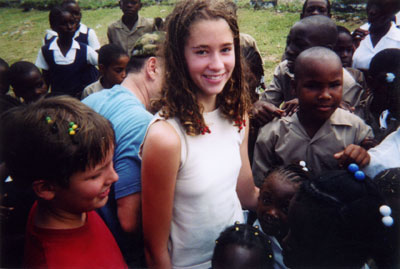