My arms reach out as far as they can. Moving forward, always forward. I pull the water from in front of me, pushing it into my wake. My lungs burn from the build-up of carbon dioxide, yet I hold it there a little longer, trying to save as much time as possible. The freezing water burns against the determination boiling in my veins; the two becoming one. My mind goes numb, I can feel nothing. My instincts take over; I’m unable to process how quickly my feet have left the first wall. All I know is that she is next to me, the girl in red. Her own passion clear as the sun, her record time faster than mine. The race is long and she pulls ahead; stealing my hopes as she goes. I hear my name. I hear the memorized cheers. I breathe to the left; my coach is at loss for composure. His face burns, his eyes catch fire. His words echo from a recent conversation. “You will never reach your goals,“ he had said. “You will give it everything you think you have, but if it’s neck-and-neck, you will not win,” he had bellowed. I remember the burn of my cheeks. I remember the waves of anger that crashed through my mind and flooded into my muscles. Emotions that once again boil over inside of me; the anger, the pain, the hurt, the confusion. The man I respect the most refuses to believe in me. My hand reaches as far as it can, parallel to my opponent’s at her hip. I am tired; I am angry; I am done with settling for less than I deserve. This moment is mine.

The push, the shove, the drive, the finish. Before I can take it in, the clock reads both 2:07.23 and first place. I shake her hand from across the lane line. I leave the pool. Kind words of congratulations crash in from every direction. They are strong and passionate, the most powerful words. But I hold my eyes steady. Moving forward, always forward. Not a smile to be seen, only a conviction. I barely look at him. “It doesn’t matter what you think,” I began, removing the medal from around my neck. “I know how to compete. I know how to reach my goals. I know how to finish a race.” I’m not sure that I thought about it. I’m not sure that I should have said it. But I knew that I believed in it. I knew that I believed in myself.

A part of me waits for his eyes to catch fire, waits for words of wrath to crash from his mind to mine, waits for what seems to be the only logical response. Another part of me yearns for them. I want this fire fueled; I want the world to know how much it means to me; I want to be a voice that refuses to be ignored. I want to move forward, be better, progress. He puts his head back in a sort of relief, a small chuckle escaping the greatest smile that gleams across his face. “Never lose that attitude,” he demanded. “Never forget that you belong on the winner’s box.” 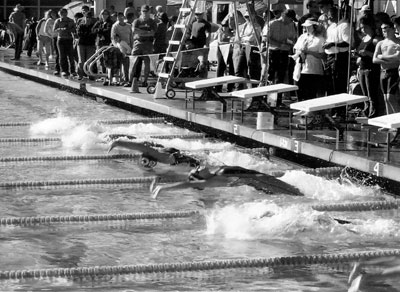