So, me & my family have always said our cat, Strawberry, has 'fat rolls'. That is what it sort of looked like, too. Not like those disgusting-looking fat sphynx cats that look like old men with beer bellies. No, they are, in fact, flaps of thick, furry skin with fatty tissue inside, located near her hind legs on her belly.

And the confusing thing is, she's actually a sleek, fit cat. We weren't feeding her too much, and she got plenty of daily exercise. In fact, the vets never said anything about it, lifting the flaps of skin and/or working around them, like it was completely normal, and they said she was a healthy weight & in perfect shape.

So, um… What in the world?!?! Then my mom got the idea of searching it. And she laughed out loud, tears coming to her eyes as she read. Curious, I peered over her shoulder.

And burst out into raucous laughter.

At this point, my dad, who was sitting on the couch near us, sighed gustily and put sound-blocking earplugs in his ears. He's sensitive to loud noises; it stresses him out.

But back on topic.

They're called primordial pouches. YES!!!! They're not fat rolls, they're pouches! Who knew cats had pouches sometimes?!?!

We read on. Turns out, it's pretty rare, and even then, it's more common on male cats. Strawberry is a female.

According to thecatisinthebox.com,  "A cat's primordial pouch is a saggy flap of (usually) fur-covered extra skin on your cat's underside. It typically covers the length of a cat's stomach but is most noticeable toward a cat's hind legs. The pouch may sway left and right with every step, or it may jiggle a bit as she walks."

Furthermore,"The primordial belly is sometimes called the “spay sway,” from the mistaken belief that spaying or neutering a cat causes this hanging tummy skin.

The association between spaying and neutering and the development of the primordial belly might be incidental. Cats seem to develop their primordial bellies as they start to mature into adulthood, at a time when many cats are coincidentally spayed and neutered."

Also, usually, it only occurs in specific, rarer breeds, like the Mau, Japanese Bobtail, Pixie Bob and the Bengal cat.

Strawberry is none of these. In fact, she's Bombay mix, her Mom being one, and her father a stray, most likely a mix of breeds. We think he was a tabby shorthair without a primordial pouch, because Mom was the typical black Bombay with slick medium-length fur, but 4/6 kittens were tabby striped and had short fur.

"The Bombay cat is a type of short-haired cat developed by breeding sable Burmese and black American Shorthair cats, to produce a cat of mostly Burmese type, but with a sleek, panther-like black coat." (Wikipedia)

I do want to add that we are not irresponsible cat owners. We fostered Cat Mom from Robin's Nest. She'd been found wandering & pregnant near there. She was not our cat. On top of that, if she was, she would have been fixed. We spay & neuter all of our cats. They are all microchipped, collared, and have had all of their vaccines.

We foster-failed two of the kittens, said Strawberry and her brother, a bombay-colored and long-haired cat. Strawberry is a torbie,which is a tortoiseshell with some tabby stripes.

She is is very unusual cat.🙄😆

There are many different hypothesis why cats have primordial pouches, but none are scientifically proven.

This is another passage from thecatisinthwbox.com: "Unfortunately, science does not seem to have an explanation for the existence of the primordial pouch. There are plenty of armchair scientists’ theories out there, however, that may or may not have merit."

One theory is that the primordial pouch helps protect a cat's organs in a fight.

"The excess skin of the primordial pouch does seem strategically positioned to cover a cat’s viscera. When cats fight, they “bunny kick” each other, and a well-placed clawing with a back leg could shred a cat’s vital organs if there wasn’t something there to protect it."

Also, "One theory is that this extra flap of skin allows a cat to stretch and move more easily. The idea is that the extra belly flab enables a cat to run faster and jump higher." This is one of the more arguable theories. Look into it if you're interested as to why.

There are many other hypothesisis as to why cats have this extra skin. I've only included a few points.

Does your cat have a primordial pouch? Comment below if she/he does 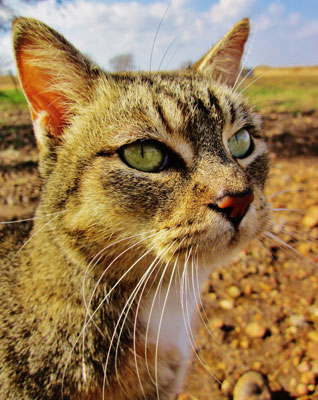 View profile
Sorry about the formatting issues & how it repeats a bit! My mistake!