I managed to hobble over the step onto the ice without falling. I tried as hard asI could to stay up, but my skates were sliding all over. The coach blew thewhistle, and I made my way to the rest of the team. It was 5:30 in the morningand Day One of hockey practice.

If someone were to ask why I joined thevarsity hockey team having never ice-skated, I wouldn't know what to say. Ithought it would be fun, but I had no idea what I was getting myself into. It wasfun, but it was so much more. It was a huge learning experience, and a lot ofhard work.

So there I stood (well, trying to) with my brand-newequipment, among the others, most of whom had been playing for years. It didn'ttake me long to figure out that hockey isn't like other sports where you can fakeit if you don't know what you're doing. In most sports, you walk or run, andeveryone's been practicing that since they were babies. But in hockey, you're onice skates and, in my case, this was a big problem.

So now I have my firstseason under my belt and, after a lot of practice and hard work, I'm ready tostart a new season. I'm not that good yet, but at least at practice I canconcentrate on improving my game, because the hard part is over: Learning to"walk." 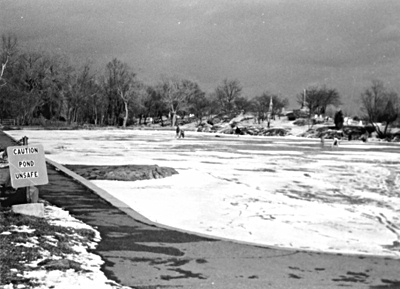