There is no "I" in Team MAG

We all know there is no"I" in the word team, but it took me an entire basketball seasonreally to understand this.

The 12 girls on the team were verydifferent. We fit into all categories, from nerd to jock to popular -even one "bad kid." We started the season despising each other andwishing we had more of our own friends on the team.

It istradition to wear something special on game day, but our team didn'tcare. Our first game day only four players wore their jerseys. The restwere "too cool," and eventually everyone gave up dressingup.

On the court we had enormous potential. Each had a lot tooffer, but we didn't play well together. Our point guard only passed toher friend, and when this was impossible, she didn't pass at all. Ourbest forward was a ball hog; on a three-on-one breakaway she would turnover the ball every time by running into the defender. I am not sayingthe games we lost were the fault of specific individuals, but myso-called team acted nothing like one.

My coach only compoundedthe problem. It was as if she didn't care; we would play Knock-Out allpractice or sit on the floor and talk. Sometimes, if we were down bymore than five baskets, she would send out those who played least andlet us get crushed. At one game she told us she had "lost hope" andthat we couldn't possibly win back 13 points in the remaining 15minutes. Her lack of faith destroyed our spirit and the team fellapart.

Playing lost its fun and became a chore. Finally, three ofus decided that if our coach didn't encourage us, we would. We begandressing up for games, and called everyone the day before to remindthem. We also learned innovative plays from more experienced players. Ina short time we were working together as a team and having fun.Persistence at demonstrating team spirit and good sportsmanship openedsome eyes and we began to see each other for who we really were insteadof our stereotypes. The results were amazing.

From that season Ilearned there is no "I" in team. I thought I understood that, but Irealized it isn't enough to just take care of yourself. I found I hadenough spirit for everyone. I now know, along with 11 other people, thateach of us has to work to make our team the best possible. 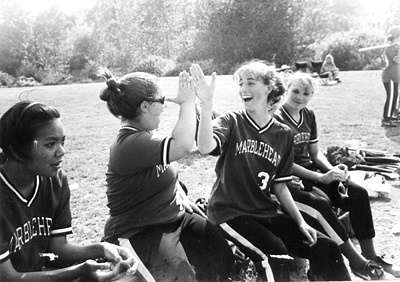