Favorite Quote:
"If you can dream it you can do it"- Walt Disney

Two strikes, three balls, no chance. The shy little freshmen going up to bat once more. The cheering voices of my team have subsided to a few single people shouting my name, mainly my friend Sarah and my mom. Newark’s pitcher is visibly tired and I could see the sweat rolling down my nose. I’m discouraged to say the least. The heat was awful, 90 degrees, and we have all black uniforms. Just one hit, it’s all we need right now. We were losing, as always, but this was quickly becoming pitiful.


She was the best pitcher in the school teams, or so I’ve hear. She winds up, her arm spinning like a windmill, and lets the ball fly. I swing hoping for the best. Ringing. The ball hits the bat sending a ringing noise through the air. My hands sting from contact and ear splitting cheers erupt from the dugout.


“Keep going!” Coach Watson’s words rattle in my brain. Newark’s dugout went silent. My right foot grazes first base, dust filling the air behind me. I see the centerfielder and right fielder scrambling for the ball. Finally second base is right in front of me.


But I wasn’t done. Mr. Dick is waving me to third so I comply. Effortlessly touching second base I don’t look back. The dust filling my mouth makes it all much clearer, I can’t breathe. Every step felt like miles and my breathing was starting to stagger at an alarming rate. The dirty white and grey helmet sitting on my head felt heavier as the headache set in. But I made it.


It hadn’t occurred to me that my breathing had come close to stopping. Mr. Dick was smiling and I assume congratulating me. However everything went in one ear and out the other. “Do you want a pinch runner?” he laughed. I stood up straight and said “No.”


Looking in the dugout I see Sarah smiling at me. My team is still cheering as the next girl walks up to bat. The swing goes by in slow motion, my heart still pounding in my chest, a smile spread widely across my face. She hits the ball but directly to the pitchers glove. Three outs. I had run all this way and never even touched home plate.


I was only playing first base, so I had time to stop and see my parents. No, not both of them. Just my mom. “Where is dad? Why isn’t he here?” I say a little breathless. She looks at me and smiles “He couldn’t make it. But your hit!”  she squeals. I gave a fake smile. My dad wasn’t here. He didn’t see me, his daughter, hit the first and only triple in the Dickinson season. An awful feeling stirring inside me upset, hurt, angry, and tired. He wasn’t there.


Flashback to my third year playing. I was still the new girl yet one lucky day I hit a triple. Even if it was on errors. “Did you see Emily?”  my coaches screamed afterwards. Everyone had seen it except two. While dirt was filling my air, grease was filling theirs in the concession stand. They missed my first ever triple.


Walking away from the field almost five years later I feel the same upset feeling. He wasn’t there again. Maybe it just wasn’t meant to be. Maybe I only do well when no one’s watching. Maybe. But no. I won’t accept that. If I want to improve I need to get over my fear of performing in front of people. I need to do this. I can do this. I will do this. 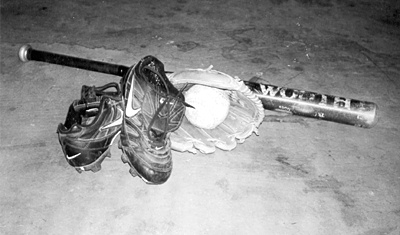