As a biracial teenager of African-American and Puerto Rican descent, the Census Bureau's report that there are 37 million Hispanic Americans in the United States - overtaking African-Americans as the country's largest minority - did not surprise me. And, that number may actually be even bigger due to discrepancies within the Bureau's classification of race.

These new demographics have some concerned about their effect on politics and education within the African-American community. I am interested in the results of this new statistic because there will be many changes, although none will be made to the African-American community because of the fact that their populations are close and share the same agenda.

American society, however, has no choice but to respond to Hispanics now that they are the largest minority group. It seems to me that this could be a problem for mainstream America, but I believe it can also be an avenue for a solution.

First, what exactly is a Hispanic? The phrase Hispanic or Latino is often a catchall for people from a number of origins: Mexico, Puerto Rico, Cuba, Central America and South America. Even with these disparate origins, there are still a number of commonalities, including language. Hispanics, and more broadly people of color, will have to have their issues brought to the forefront and acknowledged, especially with regard to the political system. Hispanics are concentrated in our nation's key states with the most electoral college votes: Texas, California, Florida, New York and Illinois. Unfortunately, the Census Bureau also reports that 60 percent of the Hispanic population is ineligible to vote. Those of voting age will have to assume an active role in compelling politicians and other officials to respond to their concerns that include adequate and affordable health care, their portrayal by the media and quality education - concerns prevalent in the African-American community, too. Hispanics and the African-American community will coexist and cooperate in acting aggressively and responsibly with this increased political power and make their issues a top priority.

With regard to education, the Department of Education reports that Hispanics, as well as African-Americans, lack proficiency in the sciences and mathematics, have lower reading proficiencies, score lower on standardized tests such as the SAT, and are less likely than their white and Asian/Pacific Islander counterparts to go straight from high school to college, with only 45 to 55 percent enrolling part-time in a two-year or community college.

Nevertheless, now that Hispanics are the largest minority, they are off to an auspicious start to increase the graduation rate, since they constitute a major part of this country's workforce. I think we all know the answer, but can the U.S. afford to allow such a fast-growing sector to continue to go uneducated? 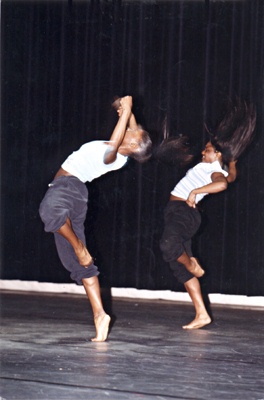 View profile
Hispanics are now the largest demographic in the country and yet everyone in everyday life and in any form of media continues to ignore this.

We'll see how long it takes for America to catch up.

raqueltg77 said...
on Mar. 17 2009 at 6:54 am
Hi Monica O. I am doing anthropology paper on being biracial i am african american and puertorican also (my father is from san juan) i wanted to know i could interviw you and you could share your story of being biracial? via email have you ever felt different? do you associate with both cultures? have you ever felt like you had to choose a side? etc... if this is something you would like to do please email me at raqueltg77@yahoo.com