When I stumbled upon a Facebook group called “waking up in the morning and feeling like P. Diddy,” I couldn’t help but become a fan. But probably not for the reasons that you think. I am perfectly aware that that popular American music is crap, as a rule, and the reason that the industry is able to sell the public on garbage like “Tik Tok” by Kesha, is because when you mix the immature messages, unnecessary sex appeal, and general stupidity with a catchy beat, it miraculously passes as music.
I don’t even think Kesha’s a real name now that I think about it. And I’m not entirely sure what the dollar sign through the ‘S” is doing. We know that America has become an image-obsessed, but is putting the universal symbol for money in the middle of one’s name really necessary? Also, the words “tick” and “tock” have C’s in them. That makes them real words. It’s okay Kesha, most of America can’t spell either.

Kesha first appeared in Flo Rida’s “Right Round,” but nobody knew she even existed because she was not credited, and did not receive any money for the part. I honestly thought that scratchy, annoying voice backing up Flo Rida’s meaningless words was Katy Perry (who’s first single famously stated, “I kissed a girl and I liked it”). Kesha actually appeared in the music video for this song, but was not credited for that either. The world works in funny ways sometimes.
After Kesha’s entrance into the American world of popular music (which, it would seem, does not require any sort of special talent, just a lot of money or a pretty face), Tik Tok reached number one in five countries. Her first album, Animal, debuted at number one as well. Congrats Kesha, in a country where money means success, sex is a media tool, and intelligence is frowned upon, you are number one. Empty lyrics, shallow messages, and shameless promiscuity -- looks like you have every component necessary to make it to the top.
Tik Tok plays on 107.9 The End roughly every thirteen minutes. You may say that comparing this to such mind-control as seen in 1984 by George Orwell may be going too far, but honestly when something as numbing as this song plays in your head repetitively for a week and three days, you start to wonder what it’s doing to your IQ.
This morning, an eight-year-old girl was phoned from 107.9 to discover that she had won tickets and backstage passes to Justin Beiber. After she stopped screaming and crying into the receiver and describing her future wedding to the rising pop star, Tik Tok blared through the speakers, tainting this little girl’s ears. It’s comforting to know that the message we are sending the young women of our future is to kick the dudes to the curb unless they look like Mick Jagger, and to party till the po-po shut you down. Solid advice Kesha, keep it up.
Historically, Kesha has puked in Paris Hilton’s closet after crashing her party, and broken into Prince’s home so she could give him her demo, because she was desperate for the fame that would come from her big break. Let’s just say Prince never contacted her. The future is wide open for this girl, and her next single, already on the rise, is titled “Blah Blah Blah.” I guess she couldn’t think of anything more creative. Its okay though, because that’s all anyone hears when she sings anyway, and people generally don’t have any idea what she’s “ta-ta-ta-talkin’ ‘bout”. Somehow, I don’t think this is going to get her very far in life. Tik tok, looks like your music career’s almost up, Kesha. 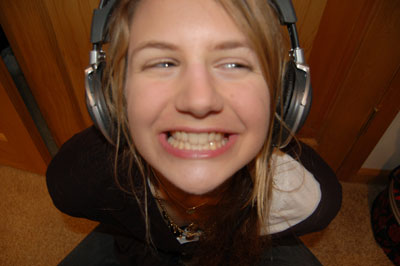 The author's comments:
The theme this week in creative writing was "Rant"... this is what came out.
Post a comment
Submit your own

Favorite Quote:
"Tough girls come from NY. Sweet girls come from Louisiana. Prissy girls come from California. BUT INDIANA GIRLS have fire and ice in our blood. We can ride dirt bikes, be a princess, throw left hooks, pack heat, bake a cake, change a flat, hang a light and if we have an opinon, you're......going to hear it!!"

Favorite Quote:
If you enter this world knowing you are loved,than everything that happens in between can be dealt with.-MJ

Favorite Quote:
(couldn't think of anything better at the time) "Take the first step in faith. You don't have to see the whole staircase, just take the first step."-Dr.Martin Luther King Jr.

PWN, have you even heard Kiss N Tell? What about Stephen? Blah Blah Blah? Hungover? Party at a rich dude's house? Backstabber? Dinosaur? VIP? Cannibal for pete's sake?? We r who we r? Sleazy?

How on earth can you say Tik Tok and Your Love is My Drug are the dirtiest and Stephen and Kiss N Tell are the cleanest?? What songs have you been listening to??

View profile
Animal, Stephen, Get in Line (its not "nice" but its perfectly clean), Hungover, Kiss N Tell, and Dancing with Tears in my Eyes are all perfectly clean songs, and Boots and Boys, and VIP really aren't that bad either. All the others are either about getting drunk or drugs (including Tik Tok and Your Love is my Drug). Thats why I think they're definitely not the cleanest. at all.
TheJust ELITE said...
on Dec. 18 2010 at 8:08 am
TheJust ELITE, Ellenton, Florida
254 articles 202 photos 945 comments

View profile
Um have you listened to the rest of the album? What about Take it Off or Party at a rich dude's house? I couldn't even get through the songs cause they were so vulgar. Love is my Drug, the only thing wrong with it is "Do you wanna have a slumber party in my basement" and I like Tik Tok because of the chorus and last verse. Believe me they are not the worst...
PearlWhiteNight BRONZE said...
on Dec. 17 2010 at 9:52 pm
PearlWhiteNight BRONZE, No, Pennsylvania
3 articles 7 photos 23 comments

Favorite Quote:
I have found power in the mysteries of thought. -Euripides

View profile
This is quite true, actually. You have little girls listening to promiscuous music performed by artists like Kesha, and they get certain influences bearing down upon them. It isn't healthy to be a little girl and singing vulgar and sex-oriented rap/pop.
magic-esi PLATINUM said...
on Jun. 2 2010 at 7:12 pm
magic-esi PLATINUM, Hyde Park, New York
27 articles 0 photos 231 comments

View profile
This was SO FUNNY. It is completely true. I used to like Kesha's songs just because they had a catchy beat, so they weren't as annoying to listen to as Justin Bieber or Young Money, but I agree with you. This article was hilarious! You should DEFINITELY keep writing.
TheJust ELITE said...
on May. 31 2010 at 7:29 am
TheJust ELITE, Ellenton, Florida
254 articles 202 photos 945 comments

View profile
I really enjoyed this! I personally like Tik Tok and Your Love Is My Drug, but that's all. Those are the two cleanest songs on the album, so I didn't bother listening to any more. But thank you for posting this! You're entirely correct!!
TheJust ELITE said...
on May. 31 2010 at 7:25 am
TheJust ELITE, Ellenton, Florida
254 articles 202 photos 945 comments

View profile
Oh my gosh I LOVE this! I really enjoyed your tone that you kept throughout the piece, and I COMPLETELY agree with you. Great job! (Y)
krazykathleen BRONZE said...
on May. 5 2010 at 5:15 pm
krazykathleen BRONZE, Edwardsville, Illinois
1 article 0 photos 99 comments

Favorite Quote:
"7/5 of all people do not understand fractions." -Unknown