Cetaphobia: The Fear of Whales MAG

Everyone has an irrational fear. For some it is the color green; for others it could be the dark. In my case, it's whales. I don't know why everyone finds this so amusing and surprising, considering there are people out there scared of much weirder things, such as marshmallows (no offense if that's you). I mean, I see why fears like heights, snakes, or spiders are far more common and fairly accepted. You can fall, you can be bitten, but what are the chances of a whale swallowing you? I really have no idea. To be honest, my fear seems a little odd even to me, since I can't really give you a good reason. But, that's what makes it an irrational fear.

Every time someone learns about my fear of whales they're so entertained you'd think they'd been told I was scared of something as harmless as a teddy bear. In one class at school we were practicing descriptive writing, and naturally the teacher used a picture of a whale. Even though it was in its natural habitat and a photograph (for ­crying out loud), I could barely look at it without shuddering. So of course my friends told my teacher, who burst out laughing and wouldn't let it go. But cetaphobia is perfectly justifiable. I mean, if you really think about it, a fear of whales is reasonable.

For one thing, a killer whale (great name, huh?) has a dorsal fin six feet in length. And that's just the fin. But the killer whale, also known as orca, is relatively small. Compared to a humpback or a sperm whale, the orca is like a chihuahua next to a Great Dane.

Whales are ginormous. How is that not at least a little scary? Whales are the largest mammals (yes, mammals, complete with hair and the ability to nurse their babies), even dwarfing elephants. Their monstrous size is probably the leading factor in my fear.

Another reason for my fear is that I can't imagine swimming in the ocean with a whale right there beside me. I have reoccurring nightmares that I'm in the ocean, at school, or in some other public place and a whale (or multiple whales) appears and begins circling me and brushing up against me. This is terrifying. If anyone else with cetaphobia is reading this, he'll understand the terror of these dreams. How could any human get that close to a whale without freaking out? I swear you'd have to be a robot or something.

There are plenty of scary facts and explanations for cetaphobia, but I'll limit myself to just two more: their power/strength and their appearance. Considering their size, imagine how strong they must be. I mean, those things can take out great white sharks, a commonly feared ocean predator. Just let that sink in. It perplexes me that anyone would get onto a boat to go whale-watching when for all they know, the whale is right beneath them and might breech at any moment, capsizing the boat.

My parents don't understand my fear because they say “whales are so beautiful.” I'm sorry, but I really don't understand how whales can be considered beautiful. Out of all the creatures in the world, from lions to mice, you're telling me this giant creature covered in barnacles is beautiful? I mean, you could argue that crabs are stunning too.

Hopefully I have helped you understand that cetaphobia is real and perfectly reasonable. Or maybe you have some clarification about my fear of whales. If any part of this article has caused you to become afraid of whales or like them any less, I apologize. 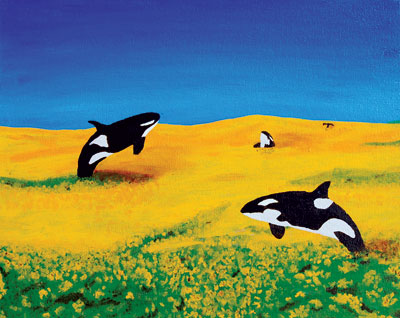 The author's comments:
This is for people who are wondering who in the world would be scared of whales and why. I'm interested to see who else shares my fear of whales. This probably isn't exactly a great piece of work. Since I'm always open to improving, criticism is welcome, as well as anybody's opinion on both my fear and this piece.
Post a comment
Submit your own

Favorite Quote:
"Can you see the moon? You can't, then you must look behind you, then to the side and everywhere else until you do see it!"

View profile
Opinion
Global Warming... Is It Real?
By Anonymous

This article has 50 comments.

tojolee said...
on Jul. 18 2019 at 5:30 am
tojolee, Arvada, Colorado
0 articles 0 photos 1 comment
View profile
I really wish people would stop making fun of us for having this irrational fear. Like the many good points you brought up, it’s just as valid as someone who is scared of cats or any animal. I’m really glad there are people that also share the same fear as I do because I always thought I was just so weird for being scared to something so “harmless” (seriously not that harmless). It just upsets me that people think it’s okay/ funny to make fun of us for something we can’t control, but hey, that’s life for us.
Tess said...
on Feb. 28 2018 at 3:37 pm
I also have a phobia of whales and people think it's strange
Addie said...
on Aug. 1 2017 at 2:46 am
I have a fear about how big the whale is like you could be on a boat then you see this HUGE fish swim up near you and aaahh it freaks me out when I try to say it. But same.
TexAshley said...
on Apr. 15 2017 at 9:01 pm
So much yessss to this! I've had a huge fear of whales since before I can remember. My parents even said I used to get scared during bath time as a toddler if my mom gave me a whale toy to play with. Loved your blog!
Greatsheep@gmail.com said...
on Dec. 6 2016 at 9:53 pm
THANK YOU SO MUCH!!! Sorry I didn't say this in my last comments,but this was amazing!!! Everyone thinks I'm a weirdo because I have a fear of whales but I'm going to show them this and say I'm not alone✌
Dakota said...
on Dec. 6 2016 at 9:40 pm
Omg I have a fear of whales too!!! Someone who relates to me yaaay!!!
Paul said...
on Sep. 20 2016 at 10:15 am
I too have cetaphobia. I can't look at a picture or even a stuffed whale without cringing. You've put this fear into a pirfect picture.
Shaddad said...
on May. 6 2016 at 11:44 am
I never Knew there are people who has the same fear , I was always embarrassed of mentioning this to anyone cause every time I say it people just laugh at me , no I can understand this more !
Pandaa1234 said...
on Feb. 3 2016 at 1:09 am
I totally get this! Omg. This article is great, it really helped to explain my fear of whales in a easy way! Thank you so much :3
ZabrinaJayne said...
on Jan. 19 2016 at 8:27 am
This is literally my life
ErinLara BRONZE said...
on Dec. 23 2015 at 1:40 am
ErinLara BRONZE, 4211, Other
1 article 0 photos 1 comment
View profile
Thankyou all for the positive feedback!
natcac SILVER said...
on Aug. 11 2015 at 4:45 am
natcac SILVER, Folsom, California
5 articles 0 photos 8 comments

View profile
Yes, even pictures! They're just too close to reality
firenze0728 said...
on Jul. 17 2015 at 2:45 pm
this is definitely a real phobia that shouldn't be taken lightly. once i had to do this brochure layout about environmental stuff with images of whales... i freaked out and almost had an asthma attack. i had to take a break to calm myself down—and i haven't told anyone about it 'cause i know they'd laugh at me. i had to finish the project by working with the smallest possible view so as not to see the entirety of the images.
taytayisbae8 said...
on Jun. 1 2015 at 11:40 am
OMG ME TOO!!!!!!!!
taytayisbae8 said...
on Jun. 1 2015 at 11:38 am
Omg I am so scared of Whales!! Now I know what it's called!!!!
So Scared said...
on May. 10 2015 at 2:17 pm
now i know that i have Cetaphobia @@
Xeqq said...
on Apr. 30 2015 at 10:58 am
OMG!!! you are me. seriously all what happened to you, same here (the friends jokes, the father apreciation, the irrational "scenarios", the creepy nightmares), we should get in touch to talk about this, like a group therapy. my fear goes a little more further, I fear them and imagine them surrounding me very close, not only when im in the ocean (sooo much years ago) or in a pool, I mean, right now, I have to look around my room (wait, I ll check it, fine Im cool) cause I swear, I think they are behind me smiling with that sadistic black and white creepy face of them(talking about Orcas) waiting for me to realize that they are behind me, hunting me or waiting to do God only knows what to me (oh my god, I can finnish this without, again, taking a look). it is curious, that when I was a child (Im 26 now), I used to "love whales", free willy (the complete saga) was on my top movies, even I used to say what your parents says about them. but later on, I started to develop this irrational fear (as you well explained). I fear them, specially Orcas, but all of them with all the facts that you already put, adding their creepy sounds, the "surprise factor", how smart they are and capable to "organize... I dont know...a cruel and sadistic and very painful killing?" (they are known to be "cruel" with their food so...). anyway, I fear them, and now I feel less weird, I guess =(
Ashleylamb1234 said...
on Apr. 25 2015 at 11:20 pm
I'm afraid of whales to. My boat was flipped by a whale and now I'm afraid of them. It's not that irrational I mean come on for Christs sake there are people scared of glitter. Everyone has fears it just takes time to figure out what they are.
orcas26 said...
on Apr. 23 2015 at 5:41 pm
Um… Killer whales are actually in the dolphin family, but other than that I agree.
Teenscaredofwhales said...
on Apr. 21 2015 at 12:46 pm
I SO AGREE!!! People in school think it's stupid. when I was younger a group of kids all got the animal books from the library corner, picked a page with whales on its and surrounded me with photos of them. I burst out crying had a mini panic attack and had to move to the other side of the classroom