I see articles saying that technology is taking apart language. That txt spk is the death of English. This may be true, but we must remember that the language we speak today isn't pure and did come from languages that are now 'dead'.

Just like everything else in the universe, language evolves. It changes alongside people's migration and technology, and has been ever since the its creation.

In fact, could you imagine if the first people who started to write down their language were stopped and told that doing so was taking away from the language. That is about as ridiculous as telling someone that their perfectly legitimate communications that is used by millions should be stopped.

This new dialect, txt spk, wasn't forced onto anyone. It wasn't repeated and forcefully ingraned in our brains. It naturally came to people as a convenient way of speech. When immigrants came to America, it reshaped English. When technology comes to earth, it will reshape language in a awkward strange way. Well, to the older generations at least.


It can be argued that txt spk really is going to tear apart language, and we should fear it. I don't know what the future holds. In fact, other countries are losing the symbols on their letters since texting with normal English characters is much more convenient.
people in other countries losing their symbols. But no matter how hard you try and fight it, the evolution will take over. Time will prevail, no matter how evil it is.

But there is hope. It has been noticed that teenagers who use txt spk are often more literate than their peers. Using txt spk requires one to understand manipulate the language. 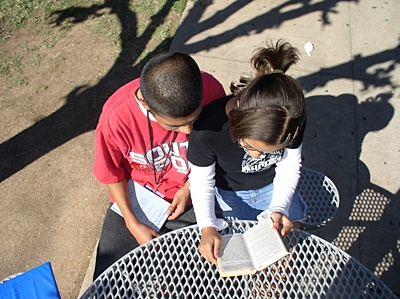 The author's comments:
I see so many people complaining about txt spk. Being forced to memorize spelling and grammar. We've survived a million years without this type of enforcement.

Thank you spell check for making sure I have no red lines under my words.
Post a comment
Submit your own

Favorite Quote:
"I've missed more than 9000 shots in my career. I've lost almost 300 games. 26 times, I've been trusted to take the game winning shot and missed. I've failed over and over and over again in my life. And that is why I succeed."
~Michael Jordan