In Beowulf, the main character Beowulf is not only a ruler who peacefully rules his kingdom for fifty years but also a fighter who always keeps his promises no matter what enemy he will face. On the contrary, Gilgamesh is about the Uruk King, Gilgamesh, who keeps making trouble for his people and refuses to face his enemy after some tests even though he is the proposer of the adventure. From the two characters' commitment to their citizens and promises, we can see that Beowulf is a better hero than Gilgamesh, which is important because responsibility is an essential quality of a good hero.

To start with, as a king, Beowulf takes more care of his people than Gilgamesh. “He is king, he does whatever he wants, takes the son from his father and crushes him, takes the girl from her mother and uses her, the warrior’s daughter, the young man’s bride, he uses her, no one dares to oppose him” (Gilgamesh 72). In other words, the main goal of Gilgamesh to rule is entertaining himself by forcing misery on his innocent citizens. Obviously, his people are painful under his tyranny. As a result, they complain about their suffering to heaven. Enkidu is then born with equal strength as Gilgamesh to balance this situation (Gilgamesh 74). By contrast, Beowulf behaves more like a problem solver. For instance, when there is a dragon keeping burning down villages and farms in his kingdom, eighty-year-old Beowulf takes his weapon and leads his army to face the enemy without hesitation (Beowulf 16). Although he may get a severe injury or even die after the battle, he keeps going, because as a king, he must protect his people (Beowulf 19).

In addition, as a promiser, Beowulf always keeps his commitments in mind, while Gilgamesh tends to break them after some difficulties. In Beowulf, after hearing about Grendel, who keeps attacking the mead-hall Heorot and killing the Danes for twelve years, Beowulf immediately recommends himself to fight with the monster. He also assures that he will win because of his remarkable strength and past battle experiences (Beowulf 4-6). To successfully kill his enemy, late in the night, Beowulf “was in a fighting mood, awake and on edge, spoiling for action” (Beowulf 8-9) until Grendel comes to attack him. Soon, the monster is tightly grabbed and pulled an arm off by our hero and dies. Grendel’s death proves that Beowulf follows his words. Conversely, Gilgamesh hesitates about continuing killing Humbaba merely after several nightmares. He believes that the journey is destined to be dangerous, and he certainly will die at the end. However, he forgets that he has promised he will return with success to his people and brother. Undoubtedly, Gilgamesh shapes himself as a coward to his adventure, a breaker to his promise, and a loser to his life (Gilgamesh 105-117).

Above all, Beowulf acts more responsible for not only governing his people but also for achieving what he has promised than Gilgamesh. As a true hero, being responsible means being trusted and supported. Consequently, there is no conflict under Beowulf’s reign, and people continue to worship him many years after his death (Beowulf 16, 20). 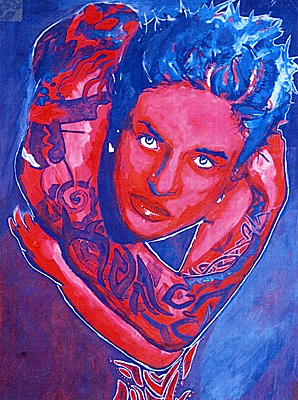 This is an essay I wrote for my Literature class last year. When I reread what I wrote today, I thought I had made some very interesting comparisons between the two heroes, which would be cool to share with everyone. Besides, Gigamesh and Beowulf are very interesting books to read!