Who would have thought that such an intelligent, convincingly tricky, successfully rich criminal would be rescued from a noose, only to be thrown into the uniform of the city postmaster? “Quite unexpected,” you may say, but you'll find even more of the unexpected in the hilarious Going Postal: A Novel of Discworld.

Pratchett is a master of irony and satire. His characters exemplify the quirky qualities of a number of absurd, but delightful personalities. I found it empowering for a man of such bad background to turn around and embrace hope and determination for what everyone thought was the impossible.

Moist von Lipwig puts together his crew of golems and other not-so-normal people to get the post office up and running again. The only power strong enough to crush him is his competition, the money-hungry Grand Trunk Company. The guilt of his past doesn't help either, plus the lies he must tell to cover up his identity as a petty thief.

As his daring quest continues in this book, Moist unmasks the new kind of man he wants to be, finds compassion for others, and catches the eye of the lady of his dreams, the charming Miss Dearheart. The story, told from an omniscient point of view, teaches that although the past cannot be altered, the future is open to change - and that the best way to conquer a sticky situation is through a wild imagination full of unexpected ideas.

How can Moist von Lipwig outsmart his past without jeopardizing the future of Ankh-Morpork? Who can be trusted, and will everyone escape their rival's attacks? Will he put the post office, his friends, and himself in the face of death? Only Moist von Lipwig can explain a postmaster's true crazy mission of “Going Postal.” 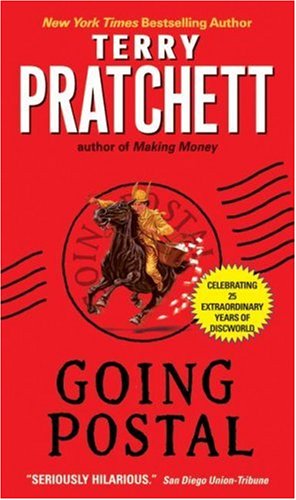 View profile
Congrats on getting in the mag! Great review. He's my favorite author, and this is one of his best books.