Imagine you are 16 and trying to fit in. To do so, you decide to help some people who are trying to commit a crime. In Walter Dean Myers' Monster, this is exactly what happens to Steve Harmon. Even though the book is fiction, something like this could happen to anyone.

While on trial and in jail, Steve decides to record everything that happens in his journal in movie format. How does he end up in jail, you ask? Well, he agrees to be the look-out for two guys robbing a convenience store but then he has a change of heart and leaves the scene before anything happens. The two guys go ahead with the robbery, however, and end up killing the store owner. Now Steve is guilty by association and on trial for a murder he had nothing to do with.

As Steve tells us about the trial in his journal, you start rooting for him, but will the jury agree? Monster makes clear that the choices you make can affect you for a very, very long time.

This is a very good book that's not hard to read and is very interesting. You won't want to put it down. 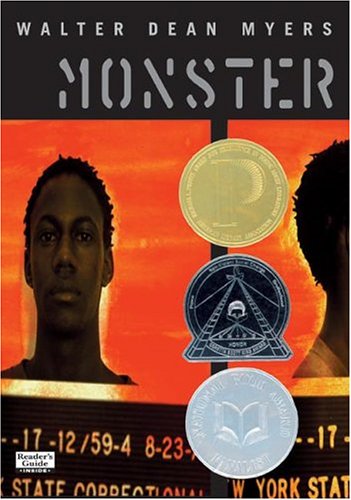 View profile
I have to agree with you on most of what you said, but i do have to say that it was a little comfusing to read. (the book, not your review) Oh, and I think you did a great job of summarizing the book, but for a review i would also talk about how the book was not jsut what it was about. That's just my opinion of course