You Shall Know Our Velocity | Teen Ink

You Shall Know Our Velocity MAG

You Shall Know Our Velocity boasts an enticingly simple story: $32,000 must be given away in a week around the world - but why?

At first glance, I was disappointed that Dave Eggers' first novel seemed to have the plot of one of my seven-year-old literary creations. However, the question "But why?" transforms a simple storyline into a confusing yet brilliant portrayal of two friends.

Y.S.K.O.V.'s fast-paced narrative is but a vehicle for the personal journeys of 20-somethings Will and Hand. Natives of Milwaukee, they make their way around the globe exploring their friendship as well as their roles as citizens of their country.

Eggers, a rising celebrity among San Francisco readers and writers, is also the author of the Pulitzer-Prize winning memoir, A Heartbreaking Work of Staggering Genius. With Y.S.K.O.V., he continues to perfect and personalize his style.

When Will's photo becomes the silhouette for a light bulb company's logo, he reaps unexpected monetary rewards. Plagued by the death a close friend, confused by life and recently mugged, Will decides that he and his buddy Hand will give away half his earnings on a week-long race around the world.

As the increasingly complex motives for the trip are revealed, we come to know nervous, manic Will and boorish yet secretly intelligent Hand as children-at-heart struggling to cope with adult situations. A large portion of their journey is a desperate search for wildness and spontaneity. They have "visions" and must carry them out - taping money to a farm animal for a farmer to discover, for example, or jumping between the branches of two trees in a Latvian field.

They search for adventure in a slightly saddening, far-too-purposeful way that will resonate with readers caught between childhood and maturity, or anyone who secretly wishes for a dashing, adventurous existence.

Eggers stays true to his style first seen in A Heartbreaking Work of Staggering Genius, but exaggerates it. Like someone unashamed of bad housekeeping, he gives us a blatantly open view into the jumpy, random reaches of Will's mind. He does not stop to smooth out the rough edges of Will's confused thoughts and, thus captures the brain in a way that clear, sensible writing never could.

I identified almost sheepishly with Will's ravings and his internal conversations. Eggers finds a parallel, unspoken thought-world and brings it to life, making it just as real as his external goings-on. This free-flowing style is also utterly indecipherable at times, often becoming either too deep or haphazard. More than once, I found myself unintentionally skipping over, with glazed eyes, paragraphs devoted to the inner Will.

Behind its constant humor and stream-of-consciousness writing, Y.S.K.O.V. finds profoundly touching moments. Eggers captures the joy and amazement of two newcomers to the wider world. Aside from this story of two friends, Eggers leads a discussion about our place in the world as Americans as our duo, previously oblivious to significant class struggle, faces the discomfort of their very privileged lifestyle.

For a teen like me, Eggers' wild, messy style and runaway plot are refreshing and completely identifiable. His occasional off-the-mark rants can certainly be accepted for his daring, unique and ultimately heartwarming tale. 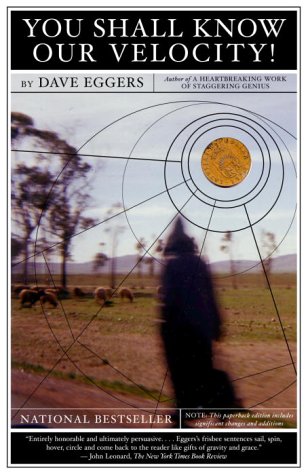