Bored of the Rings | Teen Ink

Bored of the Rings MAG

Bored of the Rings is the hilarious parody ofJ.R.R. Tolkien's epic fantasy, The Lord of the Rings. This side-splitting bookfollows the travels of Frito Bugger through Lower Middle-Earth on his quest todestroy the One Ring.

The story begins the same way The Lord of the Ringsdoes, with Frito's uncle throwing a party for all the boggies in the Sty to attend. What are boggies, you ask. They are caricatures ofTolkien's hobbits: "Boggies are an unattractive but annoying people whosenumbers have decreased rather precipitously since the bottom fell out of thefairy-tale market. Slow and sullen, and yet dull, they prefer to lead simplelives of pastoral squalor."

Frito's sole inheritance is a ring withthe power to rule all of Lower Middle-Earth. He finds himself on a journey todestroy the ring in order to keep it out of the clutches of the evil Sorhed.Along with his companions, Moxie, Pepsi, Spam, Stomper, Legolam, and Gimlet, hemust travel to the dark land of Fordor, the one place where the forging of thering can be undone.

I really enjoyed the sarcastic tone and the viciousjokes of this parody, and how the authors write dialogue similar to Tolkien's.Overall, this is a delightful book worthy of the same recognition as The Lord ofthe Rings. 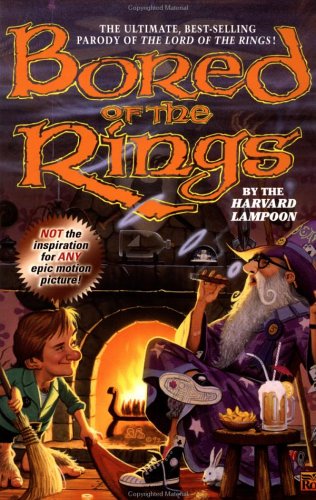