If you want to read 300 pages worth of complaints andnothing else, pick up Adeline Yen Mah's Falling Leaves: The True Story of anUnwanted Chinese Daughter. If you're looking for a lack of depth and style, youneed only turn to the first page. With the exception of a good title, there islittle else worth mentioning about this memoir.

In Falling Leaves theauthor recounts a painful childhood; she is the family's scapegoat, picked on byher siblings and abused by her parents. This is intended to be a Cinderella storywith a protagonist triumphing over hardships, with the author herself asCinderella. The hardship are the "evil stepmother" and overbearingsiblings. The setting is mid-20th century Shanghai, China. But the memoir? It isa complete disappointment.

For one thing, Cinderella is one of the oldeststories around. To be successful (and there are many successful ones), an authorneeds to rely on writing, since the plot is already cliché. Unfortunately,Mah's writing lacks every skill imaginable. Her self-pity obscures any meaningthis book might have. A touch of self-pity is reasonable, given the terribleconditions of her childhood, and would even help propel the story.

But itbecomes unbearable when Mah fills the pages with her misery: how she, after beinglost and frightened for hours, returns home to find herself not missed by herfamily; how her beloved pet duckling was used in an experiment that resulted inits death. She suffers immensely, but her writing leaves an unanswered question -"What did she learn from this?"

When our Cinderella leavesShanghai to escape her problems, she has nothing to show for her suffering, andthe memoir draws little connection between her hardships and how they made her abetter person. Already cumbersome with self-pity, the memoir is wanting inanalysis.

This lack of depth might be forgiven if not for Mah'sone-dimensional treatment of characters. Her portrayal of all characters ineither a good or bad light is frustrating. Her stepmother is always evil, hersiblings always bullying. Her aunt, on the other hand, is nothing but kind. Mostannoying is Mah's picture of herself: the young Adeline is nothing short ofangelic. The closest thing to a flaw is giving up her dream to please her father,but this can even be termed self-sacrifice, hardly a flaw.

Mah'sglorification of herself at the expense of others turns off the reader'ssympathy. When she recounts how her "evil stepmother" forced her andher siblings to beg for train fare, she writes how her siblings weakened andbegged, but she simply could not bring herself to do this. Throughout she paintsher siblings as weaklings (with the exception of her youngest sister) and herselfa hero.

If you're searching for triumph over hardship, you'll see that thehardship in Falling Leaves is exaggerated and the triumph glazed over. If you'researching for a thought-provoking memoir, you'll only find a biased, parochialaccount that leaves much to be desired. If you've nothing better to do with yourtime, try it. Otherwise, don't bother. 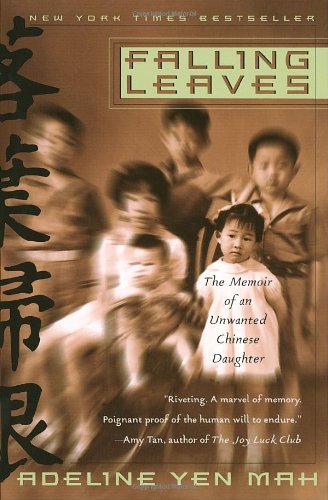 This article has 31 comments.

View profile
I agree. It's an interesting story, and it is her autobiography, so she should portray it as she saw it. That being said, she is a bit too dramatic as her writing is supposed to be factual.
Aurelie SILVER said...
on Jan. 18 2012 at 10:47 pm
Aurelie SILVER, Bellevue, Washington
6 articles 3 photos 12 comments

View profile
I agree with the flaws of Mah's story, but having read the book for the first time in 3rd grade, it quickly made one of my favorites. Perhaps instead of looking at it in this light, it should be remembered that teens were perhaps not her intended audience to begin with.
hopi1464 said...
on Dec. 11 2011 at 8:25 pm

just said...
on Nov. 5 2011 at 2:31 am
It's annoying how you can judge other's writing when you can not make a good one yourself. Please present me a best-selling book with your name on it before writing a review like this ever again.
r0xy567 said...
on Oct. 25 2011 at 7:25 pm
You do realize this was a memoir, correct? That means it was a reflection of her past, real. She wasn't trying to write a good 'Cinderella Story'. It was simply a novel telling people about her past and what she went through.
soifon123 said...
on Oct. 23 2011 at 11:52 pm
True, it is extremely mean for someone to just cast aside the traumatic experiences and cleansign attempts of a great woman without fully getting the facts correct. Conjecture is great, but not when he is making up false, libelous claims on a real human being.
soifon123 said...
on Oct. 23 2011 at 11:49 pm

I apologize ahead of time for my typos. I assure you guys that my writing is more organized that this. I was quite off by the essay above and the comments of a few in this post... My emotions got the better of me and I typed rather quickly in my attempt to defend a remarkable woman. While I dont believe everyone should be forced to fawn over her, I find it sad that one can discount her trauma as folly. I've watched many interviews involving Adeline, and I feel saddened that a woman who is many decades past her childhood can still be brought to tears while retelling those painful events. Furthermore, one does not to grow up poor in order for her traumas to be considered valid.  She was deeply affected and used her writing as a medium to expel the sorrow. I highly doubt that she is a vindictive fake. I don't think she would waste the time expressing her thoughts and spending thousands of hours promoting, composing, and marketing (while quitting her highly successful medical profession) had she just been making things up.

In a way, I can understand why a person who has not gone through a similar experience, can denounce the hard work (and cathartic, cleansing experience of an exceptional and inspirational woman), as a boilerplate of complains. However, being a person who also lived through an extremely traumatic childhood, both physically and mentally (but mostly mentally), I do not think her memoir is something made is lambast others with bias. Asian parents, especially the quintessential dragonlady stepmothers, can be exceptionally and unusually cruel. Blessed with clever minds (through great genes inherent in most asians), they can easily and covertly manipulate others and find chinks in your armor to hurt and belittle you. I graduated middle school as the Valedictorian, and was the Salutatorian in hs out of a graduating class of 600. Between that, I amassed dozens of awards. Up till now (3 years later) I still cannot find those plaques and honors as my father entrusted them to my jealous stepmother. Throughout it all, she called me inept and amounting to nothing. My achievements amount to nothing, and I will be nothing, in her eyes.
Fortunately she was wrong.

That terrible woman tried to destroy all I held dear. She confiscated pictures of my mother, intercepted letters and cards, spied on my personal calls with my birthmother, and looked for any sort of prompt that will give her reason to attack me.

I still suffer from depression today..a debilitating depression that makes it hard to enjoy life and even get up in the morning. Though I am successful now, I still feel empty.

That is the power that a traumatic experience can hold. And I assure all of you, the words and story of Adeline Yen are true. She is an inspiration. She made me feel like I can relate to someone who has been through something similar, and got a strong, successful person. And for that, I'm eternally grateful to her. I love that woman.