My Sister's Keeper by Jodi Picoult

WARNING: If you are going through a period of mild-to-moderate depression and/or are questioning your self-worth, do not read this book, because you will have an excruciating need to plunge yourself off of the edge of a cliff. That being said, which is not to say that this is not an exceptionally excellent book, I can continue my review:

My Sister's Keeper is one of those literary achievements that if you hadn't ever heard about it before you read it, you close the back cover wondering why you hadn't ever heard about it before you read it. It is one of the most touching, tear-jerking, emotion-stirring books that I have read in a long time, and I read a lot of books. When one writes about a subject as touchy as terminal illness, there's always a danger of sounding either too whiney or too insensitive, but Jodi Picoult has managed to spin an intricate web of prose that it practically border-line poetry. Also, in the character of Campbell Brown, she's added a splash of humor that is not distasteful in the serious backdrop.

Okay, here's the plot, so get ready to sob:

Three-year-old Kate Fitzgerald has the rarest form of leukemia on earth, and not one member of her family is a suitable donor for blood and marrow. Frantic and driven by fear, parents Sara and Brian contrive to conceive through IVF a designer baby that will more or less be Kate's saving grace, able to provide perfectly matching biological necessities. And for the first thirteen years of her life, this is exactly what Anna Fitzgerald does: she saves Kate's life every time she is needed, although never once is she ASKED. Then one day Kate's kidneys start to shut down, and Anna's services are once again required. Here's the thing, though: this time Anna wants to say No. And she does....in a big way. In a federal case kind of way. LEGAL MEDICAL EMANCIPATION. Otherwise spelled as D-R-A-M-A.

This book is such a roller-coaster ride: almost literally. The point-of-view alternates several times between Anna, Kate, their parents, their trouble-making older brother Jesse, Anna's attorney, and Anna's court-appointed-speaking-voice or whatever it is that Julia was: I can't remember the official name. Anyway, from all of these voices we hear not one but several stories of love and loss and sacrifice and disappointment from which they never thought they would heal. In retrospect, you really want to hate a lot of those people --- Anna for more or less condemning her sister to die; Sara for being so hard on Anna; and Campbell for being Campbell --- but somehow, you just can't manage it. They all express their stories so beautifully that the reader would probably be able to understand and absolve them even of murder. And Anna is such a sweetheart, I don't know that I would have hated her even if she was doing it just to be mean: had I have been in her position and gone through everything she had gone through in her life, I may have said no, too.

A movie version of My Sister's Keeper came out last year, starring Abigail Breslin as Anna and Cameron Diaz as her mother. The ending of the film is so radically different the end of the movie that I don't know if it should even be called the film adaption. If you're interested in the real story, take the time to pick up the book. It will be worth it.

Just be prepared to cry. 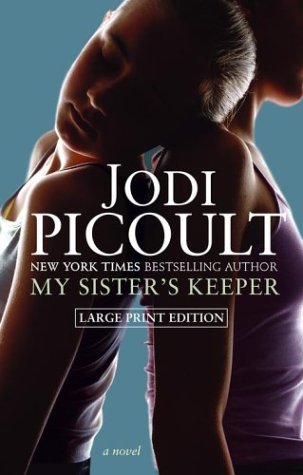 
Buy from Amazon
The author's comments:
I read this entire book in less than three hours: I could not put it down!
Post a comment
Submit your own