Kevin's safe and predictable life as an overachieving seminary student living in Longview, WA turns upside down in the book, Thr3e by Ted Dekker, when the man named Slater calls and threatens to detonate a bomb in his car. The bomb is real, as are the ones that are to follow. In a desperate race against time to find the true culprit before the next bomb goes off, FBI agent Jennifer forms a strong attachment to Kevin. Things do not progress as planned and unexpected evidence leads in totally new directions. Does Kevin Parson have a hidden past? Once the painful past is brought to the surface and revealed with the help of Samantha, his childhood friend, Jennifer is brought full speed into the action between Kevin and Slater. Between Kevin and Slater, a man out to ruin his life, is also Jennifer, a F.B.I agent trying her hardest to sort all these bombings out.

Explain how a person deals with the evil and good within themselves. Ted Dekker uses Slater to represent evil and Samantha to represent good, creating a midpoint where Kevin lies. One of the characters finds the answer and brings it to the understanding by the quote, “It's the good the bad and the poor soul struggling between them.” The same way everyone does with good and evil. In Thr3e, Ted Dekker gives flashbacks into Kevin's supposed past, with vivid and real descriptions of almost unbelievable events, which is very interesting and cram packed with facts tied to the ending.

You are thrown into the action from the very beginning, without a break to catch your breath, in this page-turner. The action and suspense, in Thr3e, is kin to that of the best of the Left Behind series by Jenkins/LaHaye or The Oath by Frank E. Peretti. Prepare to be fully involved in the characters plight. Ted Dekker skillfully and deftly intertwines theology and an engaging plot to produce Thr3e. Thr3e is for readers that love suspense and is ready to take the challenge of evil with Kevin. Dekker's book is definitely a triple thumbs up book, you must have. 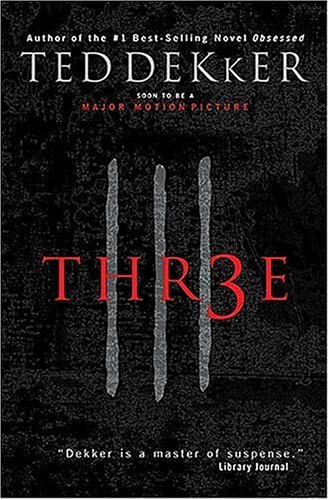