Prodigal Summer by Barbara Kingsolver
Prodigal Summer had sat on my “books to read” shelf for a year since my mother first recommended it. As books began to pile up on the tiny shelf, this particular book became just one of many. However, one day the bright, green, leafy cover caught my eye, and I began to read and found myself entranced.

Barbara Kingsolver's Prodigal Summer is a humbling but amazing book which illustrates the complexities of ecology and our role as just one of the many species living on this planet. By following the subtly intertwined lives of three characters during one inspiring summer, Kingsolver makes you feel sadness, joy, anger, and hope.

The book begins its story with the character Deanna, a middle age woman who has been living by herself in the Appalachian Mountains of Zebulon County, Tennessee, for two years. She has been working to preserve the forest and protect it from hunters, and most importantly, she has been trying to find the coyote family she suspects to have come to live in Zebulon. While she is on the trail of the coyote, she meets Eddie Bondo, a rancher and hunter in search of this “sheep killer.” The two develop a relationship governed by animal mating instinct but shadowed by their ethical differences.

The story shifts to Lusa, a woman of Palestinian and Polish background with a major in bug studying from the “big city,” who becomes a widow and thus the inheritor of the Widener farm. The farm, sitting at the base of the mountain, has been in the Widener family for generations, and with the death of Lusa's husband, Cole, the five sisters of the Widener family feel threatened and become passive aggressive towards the foreigner. Vacillating between leaving the hostility of the women surrounding her and staying on the farm she has always wanted, Lusa learns about herself and her own potential.

The last character Kingsolver follows is Garnett Walker, an eighty-year-old widower of eight years and fundamentalist Christian, who has been attempting to create a Chestnut tree generation immune to the blight, which originally wiped out the majestic trees. However, his neighbor, Nannie Rawley, a liberal minded seventy-five year old, consistently challenges his beliefs and patience. The two collide ethically and morally, which begins with Garnett's use of pesticides.

The summer blossoms, and then autumn begins to settle, as nature dictates. But does Deanna change Eddie Bondo's mind about killing coyotes? Does Lusa stay on the farm? Does Garnett learn patience with Nannie Rawley? And does the coyote live on the mountain of Zebulon? 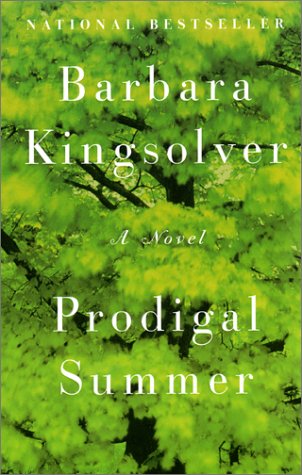