Imagine sitting at your desk at school, when suddenly, out of nowhere, falls a small black book. After school, you go to see where it fell, and then, finding it, you pick it up. To your surprise, written on the cover are the words, "Death Note." Out of curiosity, you pick it up and examine the rules written inside. "The human whose name is written in this notebook will die." Any decent human being would find that a little odd and twisted. But after reading the rules, what would you do with it? In the manga, "Death Note," a japanese high school senior faces this question in the first few pages. This young man's name is Light Yagami, and he will become the god of a new world!

Wait a moment. What? How does this work exactly?
At this point you're probably thinking, "How can this be any good if the main character is is a murderer with a god complex?"

Hold your shinigami! Let me explain. For starters, Light doesn't really see what he's doing as murder. SInce he's using the death note to kill criminals (a plot point I should make clear before I continue) he believes he's cleaning up the world of evil, and making it a good place to live for honest and hardworking people, In other words, he sees himself as the world's savior. He's actually a surprisingly likable character, albeit one that some of you will like in the same way as Darth Vader. Soon, Light discovers that this is the note book of a shinigami (god of death), named Ryuk. Ryuk tells Light that since he was the first human who touched the death note, he is the only person who can see the shinigami that the death note belongs to. He also tells Light that he will not interfere with anything Light does with the death note, and that he can continue his crusade to create a new world without fear of getting his soul taken. However, when it is Lights time to die, then Ryuk will write Lights name in his death note.

As expected, the sudden fall of criminal population does not go unnoticed by the police, and they are soon forced to call in the super detective, L. yes, L. That is his name. Or at least the alias he goes by. L is the worlds most respected detective, no one knows what he he looks like because he only talks to people through a computer, with his voice scrambled to sound like a Doctor Who Cyberman. His mind is always on full alert, and he always has a plan. He also happens to be one of the most original characters in the history of manga. L tricks Light, or Kira as he is known by the public, into revealing the city he lives in, and vows to hunt him down and bring him to justice if it is the last thing he does!

And story wise, thats all I can really say. I don't want to give to much away after all.

Now, what about the art? AWESOME! This manga is drawn by Takeshi Obata, which therefore makes this incredibly well drawn. The art is more realistic than your average manga which allows you to connect with the characters more than you normally might. This is a manga that allows you to see characters in different ways, for example, one particularly memorable series of panels where light loses control of his emotions, we see him go from calm, to furious, to an expression which would give The Joker a run for his money. L, who is usually seen with no particular expression, can be seen with a mischievous grin in one scene and a look of horror in another, upon hearing just one word. the details on small things, such as a computer, a gun, and the death note itself, are top notch. Though it should be noted that up until volume 3, the art is rather average. Though after that, now the artist is more familiar with what he is drawing, the art improves significantly.

When it comes to characters, you really can't go wrong. The protagonist, Light as I said, can be as likable as he is evil. His mental monologues give the impression that he sees himself superior to those around himself, including shinigami.

L, as I already stated, is one of the most original character ever to walk the pages of a Japanese comic book. When we meet him face to face in the second volume, and he says the immortal line, "I am L." He also gives off the air that he is superior to those around him, but in a much more subtle way than Light.

Misa Amane, who is properly introduced in volume 4 is probably the only character anyone will have any issues about, probably because of her bubbly personality which feel a little out of place with the rest of the story. Though, admittedly, she only pretends to be a ditz, and can actually be a very serious character when she wants to be, or when the plot requires it.

Ryuk, the death god, is the one who got the wheels of "Death Note" rolling. When we first meet him, we think he might be a darker character, but in reality we find he is actually rather, playful and foolish. His addiction to apples, is the source of much (Very good) comic relief. But while he is the way he is, we will need to remember that, he is a death god.

Other characters include, Chief Soichiro Yagami, the head of the anti Kira task force and only truly good character. Matsuda, The most inexperienced member of the task force, but one of the bravest members. Aizawa, the afro haired pillar of justice with a passionate drive to catch Kira. Mogi, the quiet police man with a heart of gold. And Ukita, a simple man who deeply respects L.

When it comes down to it, I really can't complain. Death Note is one of those series that keeps you hanging on to the end (and what an ending it is!). Probably the biggest turnoff for most people will be halfway through the series, which I won't spoil for anyone. Tsugumi Ohba masterfully wrote a, well, masterpiece, and created a world much like our own, where anyone can die. All it takes, is a name, a face, and a notebook. All in all, I would have to give this series, a humble, 9.75 out of a possible 10. It's only flaws, that which i have pointed out, and the fact that it might be a little slow for some people.

Also, check out Volume 13: How To Read. It's the ultimate encyclopedia for Death Note fans. It includes background info on the characters, four panel bonus comics, and the highly entertaining pilot chapter. 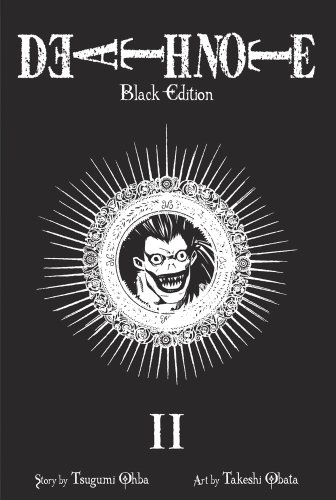 
Buy from Amazon
The author's comments:
I recommend Death Note for 14 and up. it contains violence, death, mild language (one time use of the 'S' word), and some fanservice including a shower scene.

There are 13 volumes (including 'How To Read'). And a 37 episode anime.
Post a comment
Submit your own

If you don't like it, then don't comment, and let others have their own opinions. I'm not having a very good day, so be grateful I'm being so tolerant.

mikey2.0 said...
on Mar. 11 2011 at 8:27 am
Honestly, this sounds like a story about a murderer and this "god" simply gives him a excuse to kill. He doesn't seem like a hero to me. It sounds very demonic (yes, demonic, just like Harry Potter-don't believe me? Look up the word "denomic"). Sorry, but this is not a book that should be promoted. (And don't try to change my mind, cause you won't.)