The Chronicles of Narnia: The Silver Chair by C.S Lewis | Teen Ink

The Chronicles of Narnia: The Silver Chair by C.S Lewis

Eustace Scrubb and Jill—a girl whom he recently befriended—walk through a door and find themselves in Aslan's country at the very edge of the world. Eustace returns to Narnia to find his friend, King Caspian X, as an old man haunted by the kidnapping of his only son and heir, Prince Rilian. He and Jill—along with the ever melancholic Puddleglum—are soon sent on a quest to find the stolen prince by following four simple Signs...

If only Jill could remember them. Her insistence that she need not repeat them twice daily as Aslan commanded causes disruption and distraction throughout the journey. Having forgotten the signs, she is unable to alert her companions to danger when they meet the green Lady and her silent Knight. She is unable to realize when they pass through the ancient city of giants, and ultimately leads them all into great dangers only narrowly escaped.

When I read for the first time The Magician's Nephew, it was much easier to label my favorite Narnian adventure. But as I get nearer to the end of the series, I find that that is not so. The Silver Chair has found a special place in my heart due to its humorous situations and hilarious characters.

Puddleglum is a comic genius due to his ever depressing character, even though other Marsh-wiggles believe he is incredibly whimsical and needs to take life more seriously (a statement Eustace and Jill would be quick to contend); and I've always loved how C.S Lewis brings animal's personalities into his beloved characters like Glimfeather, an owl who believes all homosapiens are insane for meeting during the day when all normal creatures should be asleep.

Visiting the “Gentle Giant's” castle is an adventure that, while reading, seems unlike most Narnian adventures (until Jill reads the cookbook, anyway). The time spent in Harfang reminds one of being stuck in an over-sized toy box, with rocking horses the size of an Arabian and life-size dolls. It reminds me, oddly enough, of The Little Princess or The Secret Garden; perhaps Jill staying in the city reminds me of that time era, but scenes from those books simply fill my mind whenever I think of this scene in The Silver Chair.

I only have one complaint with this book: It ended too soon. And by that, I mean the adventure itself. Eustace, Jill and Puddleglum spend most of their adventure searching for the Lady of the Green Kirtle's lair; once there, it seems that the rescuing of the prince and defeating the witch seem to happen quite quickly, and end even more quickly. It seems that the majority of the book is spent finding the prince, and not more than two chapters is spent actually rescuing him.

This may only be a preference and may have only bothered me while no one else has even noticed, but I was greatly disappointed. The Silver Chair, being one of my favorite books, the final adventure—the whole reason for Eustace's return to Narnia—ended far too soon.

But, alas, even with that complaint, I cannot abandon the love I have for this book. The unique story of a young boy and his friend has made an impression on my heart and The Silver Chair remains a favorite and always will. 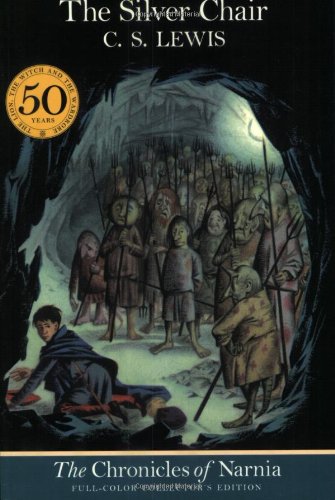 View profile
If you rate anything less than a five, please explain why. Thank you!! :)