The Supernaturalist by Eoin Colfer

Welcome to the wonderful world of Eoin Colfer; the author of The Supernaturalist. If you're reading this, it's obvious that you've never read this book. But that's what I'm here for. But before you panic and scream that you've never read anything from Eoin Colfer, I'll say that you are definitely dealing with a veteran writer. In fact that becomes apparent from the first page of the book. Throughout this page he describes the prison of anyone's childhood nightmares. He gives you the gloomy mood of hundreds of children losing hope in the outside world. He's got imagery, he's good at writing mystery sequences, he keeps you guessing, and he never fails to leave your heart pounding at the end of a chase sequence. But right now you have no idea what this book is about, right? Well I can cure you there, next we move on to the summary.
OK, so this whole book is centered a boy named Cosmo. (It's not a first person center around him, we can hear what he's thinking but he's still referred to as “he” and “Cosmo”). Cosmo's what the year 2030 Americans call a “no-sponsor”. That means he's what we call an orphan nowadays. He's trapped in a horrible orphanage called the Clarrisa Frayne Institute for the Parentally Challenged. No matter how much they butter up that name, it's still a terrible place. In this orphanage the children are subjected to tests of various medical products. That means for the life saving ones, the kids are given the disease first, so that the medicine will actually do something. So it's obvious why anyone would want to break out of a place like that. Cosmo doesn't just want to, he needs to. He dreams of escape, he plans of escape, he eats, sleeps, and thinks of escape. All he needs is that one opening, that one little speck of a chance at making a break for it and escaping to who knows where. And one day he gets that chance, and he takes it.........

If you were to hold a large amount of children in a large building with only one thing on their minds (escape), you'd probably want a bunch of abusive marshals to keep them from escaping? Well maybe not you personally, but that's exactly what the Clarissa Frayne Institute for the Parentally Challenged is looking for. But the absolute worst marshal of them all is the one, the only, Marshal Redwood. He's the exact one tracking Cosmo and Cosmo's buddy Ziplock (don't ask). When Redwood finally does catch them, he's got bigger ideas than just turning them in to Clarissa Frayne. He wants to get back at the people who thwarted him. He plans to kill them.

That's how the story ends. Redwood leveling them with a futuristic high-powered weapon of mass destruction… NO! That's not how it ends! That's just what Redwood wants to have happen. In fact, Redwood ends up dropping them off the top of a building by accident onto the generator of the building below. That's when Cosmo starts to see the creatures. These little blue guys who have three fingers per hand and suck the life out of him. Ziplock is dead beside him and he's on the way to follow him. To complete the creepy hallucination, a band of three kids come and blow the little blue guys to smithereens. They're about to leave Cosmo for the authorities to find when Cosmo speaks up about the blue guys. They hoist pick him up and run him off to the biggest adventure of his life. The little group that's picked him up call themselves The Supernaturalists and have sworn to destroy the evil little blue guys (now called the Parasites). Their little adventure includes space travel, shady technology manufacturers, and a whole lot of action.

So that's the Supernaturalist. Needless to say, I'm promoting it. If you finish thisone and just need some more Colfer, look for the Artemis Fowl Series, the Spud Murphy Series, and Half Moon. Great stuff. 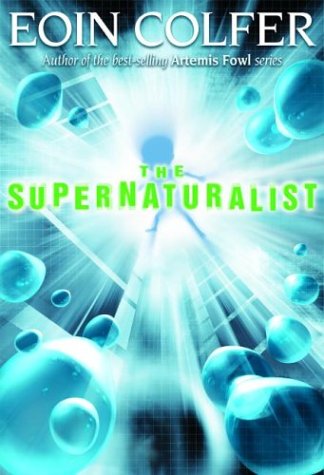