The Pilgrims of Rayne by D.J. MacHale | Teen Ink

The Pilgrims of Rayne by D.J. MacHale

Bobby Pendragon starts out as a fourteen-year-old boy who loves life, and shares it with his friend Mark, and his girlfriend Courtney. But then his life takes a wild turn when Uncle Press catches him and Courtney making out one summer morning. He takes Bobby on a wild adventure through the flumes to a different world, and he soon finds out that he is a “traveler” must battle the demon Saint Dane for control of all Halla, the existence of all things.

At first, to me, it sounded like just another stereotype of an action-adventure novel. That was a serious mistake. This Series is jam packed full of twists and turns, and lots more imagination than any old stereotype. These books will seriously keep you captive, and draw you into a lengthy plot of danger, creation and destruction, sadness and happiness, and overall, excitement, as the universe spirals down into destruction, and back up again, as the very human-like protagonist risks his life for the good of the people, and the bad of all evil.

More specifically, in THE PILGRIMS OF RAYNE, Bobby travels to tropical Ibara, an island on late Veelox, where everyone is protected from the rest of the fallen outside world. He is soon to find out that a group of uninformed rebels is planning a hijack on one of the few ships on the island, and sail it towards the mainland, where they are to find out that there was a city there, hundreds of years ago that was forgotten by the people, and now lays like a scrap heap. They also find out that Saint Dane is planning a war between the people of Ibara, and the outsider that were left behind for wanting to stay with lifelight, the cause of all the destruction mentioned in another book in the series. If you liked the movie I AM LEGEND, you'll love this book in particular. Even if you have never watched it, or didn't like it, you'd still be captive of this sci-fi fantasy series. No matter who you are, or where you come from, you'll still LOVE this book series.

These books make me think about that whatever happens in life, we're all still human, and can either choose any side. It makes me think about how there's no real right side to choose. You have to choose it making your best judgment. Something might seem like the right thing, when it's really not, but that judgment still can't exactly be made. In Saint Danes case, he looks at the world very differently. He feels that all worlds must become one, and that people should live like he wants them to. He believes that the real enemy is Bobby Pendragon and the rest of the travelers on his side. It reveals his point of view throughout the series. Apparently, he's not just some deranged maniac deciding he wants chaos throughout the universe. Well, okay, maybe he is a deranged maniac, but with a different point of view than the rest of the world. 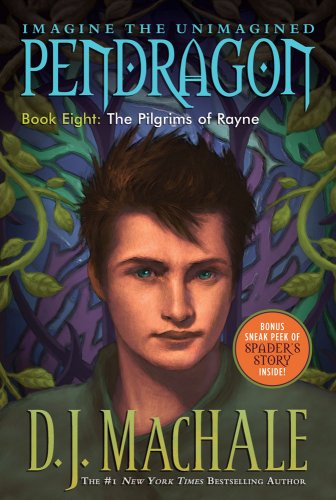