All Quiet on the Western Front by Erich Maria Remarque

I never scared to become an army ranger before reading the book'ALL QUIET ON WESTERN FRONT'.Erich Maria
Remarque,author of this book served as a soldier of Germany in first world war.Erich Maria Remarque based the book on his own experience as a young infantryman during World War I,he was partially influenced by Henri Barbusse's book Le Feu Journal d'une Escouade,(1916) a war novel published while the war was still being fought.

Paul Bäumer and his seven class mates were asked to join in German army by their school teacher.Paul explained the painful days he experienced as a young soldier in German army in this book in causal way.Paul was so shocked to see the damages caused by the war.Once in war field,Paul missed his track in the dark and was very scared.Instantaneously,Paul throws himself in to a shell crater for protection.In the same time one French soldier jumps in on top of him.Paul stabs the Frenchman and then spends the rest of the night and the whole next day watching him die slowly and in great pain.It is the first time Paul has killed with his hands, and the man's dying is excruciating for Paul to witness.He tries to help his victim, but to no avail.Remorse fills Paul and he thinks about the French man's wife and his children.Eventually,
Paul's school friends Kropp and Kat find and rescue him from battle field.

After some days Paul received leave to visit his home.He found his mother was ill of cancer.
War scene's and illness of mother makes Paul very sad.Emotions overwhelm him and he was dissolved
in to tears.It was the first time he cried so bitter.Though he recovered after some time,he was
unable to get along with his friends and family till he returned to war again,In the final day of his holiday Paul bids farewell to his mother.Both knew never they are going to meet again.

The part i like most in this book is Paul explained about his feelings after his friend Kat
died by splinter that splits his head.Paul understand after Kat's death he was only one who is alive
amoung the seven friends from his school.He explained his feelings as'I am very quiet. Let the months
and years come,they can take nothing from me, they can take nothing more. I am so alone, and
so without hope that I can confront them without fear,The life that has borne me through
these years is still in my hands and my eyes.

After i read this book i understand the painful feelings of the soldiers besides their heroic journey to save their country.I feels every one have to read this book to understand demerits of the war.It makes me feel that one thing is so common even though it's behind the borders. one thing there is common among Germans,Britains and Americans.That is they may be their's country's enemy in some way,but as a human they are soul brothers. 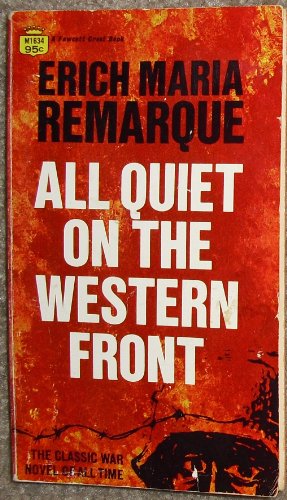