“We came on the wind of the carnival.” Within the two seconds it took me to read the title of the book, Chocolat, and the first sentence, I was completely hooked. How can one get somewhere “on the wind of the carnival”? I read on to find out and, instead of any concrete answers, I found a charming story that was as rich as the chocolates that filled its pages.
Rotating about a woman of mysterious origin and the small, French town, Chocolat is the story of a woman finding herself despite having run away from herself since before she could remember. Vianne Rocher has traveled her whole life and all over the world. From the quaint towns of Western Europe to the bustling city of New York on the golden shores of America. Vianne has never known the life of a ‘normal’ person. She has never had a stable job, an income, a community of people she could call ‘neighbors’, or a cozy home to return to after a hard day of work. But, at the beginning of the novel she hopes that she may have found a place where she can have all these things. Lansquenet is a small town in the south of France with an abandoned bakery that Vianne turns into a Chocolaterie which she names La Celeste Praline, The Heavenly Praline. She doesn’t become successful right off, the town is always suspiscious of newcomers, but, to all of the customers she does receive, she shocks them with her mysterious ability to know exactly which sweets they love. But as soon as she establishes herself in the small town whisperings and objections begin to circle around the town. Is she a witch? She’ll never admit to anything, but she soon forms a friendship with an elderly woman living on the outskirts, Armande who says “It takes one to know one!” when she firsts meets Vianne. So is she a witch? You’ll just have to read it to find out!
The book is written from the perspective of Vianne and the town priest, Reynaud. The point of view alternates with chapters, though most of it is written through Vianne, which makes the story much more enjoyable than if it had been written through Reynaud. Reynaud is a relatively young, but extremely bitter and strict priest who often sermons about the necessity of fasting and penitence, things that, obviously, aren’t too wonderful for the success of Vianne’s Chocolaterie. Vianne, on the other hand, is an energetic, kind, and witty woman who forms a close bond with the gypsies that come to town, and which Reynaud shuns. The book is full of mystery, from that of Vianne’s true origin and history; to her strange ability to read people; and the hidden story behind Reynaud and the old priest who lies in the hospital, completely speechless. The characters apart from Vianne and Reynaud are just as intriguing and deep. Who is the red-haired river gypsy and what is his connection to Vianne? What is the story behind Armande, the jolly, but odd old woman near the river? And who is Pantoufle? Oh, but that one can be answered easily. Pantoufle is the imaginary rabbit-friend of Anouk, Vianne’s six year old, fatherless daughter. That is, fatherless as far as the evident absence of a male relation. Or is there an absence?
I hate to be so secretive and obscure, but there is simply no other way I can write about the book! It’s so cryptic and…mysterious (as I’ve said) that this is the only way I can hope to make you interested in it! Though, that’s not true. Maybe the fact that there is a popular movie with the same name starring Juliette Binoche, Johnny Depp, and Judi Dench will want you to pick up the book that it was inspired by. 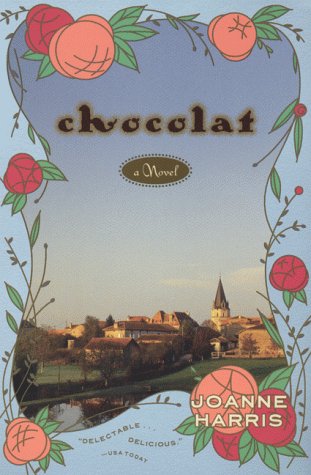