Though multiple viewings are necessary to fully appreciate Christopher Nolan's “Memento” (2000), you might want to watch it again once you realize what really transpired. The film reinvigorates the neo-noir genre through the unique concept of its story line, a defining element of the genre, and the depth of its main ­character.

“Memento” submerges the audience into the lonely and chaotic world of Lenny (Guy Pearce). Suffering from anterograde amnesia after a violent attack that killed his wife, Lenny's unorthodox quest to avenge her murder becomes the film's focus. Though the plot is straightforward, the structure of the narrative and the unreliability of the narrator create a ­complex story that questions the verisimilitude of its ­circumstance.

Lenny plays two roles: the vengeful husband and the narrator. The film blurs the line between the two so the audience can accept the effect Lenny's condition has on the narrative.

As the vengeful husband, Lenny is guided by a set of values, part of his character's coherence, that affect his behavior and actions. Lenny attempts to honor the memory of his wife, but the audience learns that he has warped this memory to facilitate his quest for revenge. Lenny's appearance progresses along with the narrative through each new tattoo he adds – a road map for himself and the audience – but the condition his injury has left him in stunts his inner character ­development.

Because of his injury, Lenny's memory is reset every fifteen minutes. The amnesia, Lenny's defining feature, not only limits his character but the narrative itself.

The audience becomes sympathetic to Lenny's plight through the use of his narration while their point of view is restricted due to his handicap. The voiceover represents Lenny's thoughts, and functions as a bridge connecting the audience to his fragmented mind. As events unfold, the audience must depend on his flawed version of the truth.

“Memento” follows a non-linear narrative structure ­operating in reverse with the ending preceding the middle and beginning. The opening scene, played in slow motion, establishes this structure so that the audience can realize the ­unconventionality of the film. The tight restrictions of the narrative shortens scenes to create a claustrophobic atmosphere.

The alternations between scenes in color and black and white complicate and confuse the narrative. The colored scenes run backwards in time, and the black and white scenes run forward causing a confused state of mind that mimics Lenny's chaotic world. Thus, the narrative structure is determined by the main character, his traits, and development.

This film is rated R. 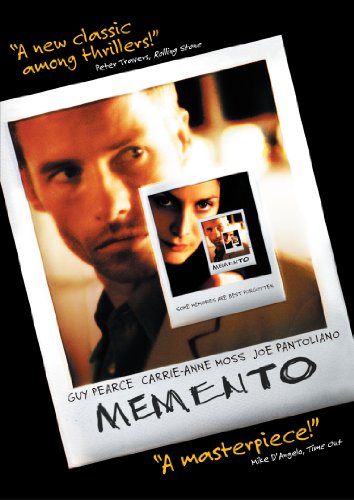