“We don’t know where he came from. He just showed up one night.” These infamous words come from the mouths of Lenni Frazier and Jamal Jenkins, the first to discover the mysterious “ghost” they and their friends call Ghostwriter. (“He’s a ghost and he writes to us; Ghostwriter!”) With the help of Ghostwriter, Jamal, Lenni, Alex, Gaby, Tina and Rob discover and solve cases in Brooklyn, around the world and even through time. From finding vandals and thieves to sniffing out imposters and computer hackers, the Ghostwriter team is going to solve any case that comes their way…with the help of Ghostwriter’s reading, of course—“He can’t hear and he can’t talk, but he can read anything!”—while also searching for the truth about Ghostwriter’s past.

While the first four members of the Ghostwriter team remain throughout the series, many others, such as Tina, join in and some familiar faces such as the introverted future poet, Rob, will leave the team and make way for new members like the bubbly, somewhat spastic Hector. Plus, there are also team members from around the world and through-out time which appear randomly to help with cases. With the wide-variety of characters and personalities, each viewer can find a character they identify with; and the wide ranges of ethnicities promote racial diversity among social circles, while also teaching viewers about traditions and every-day life in other countries and how immigrants keep their ethnicities alive while living in America. Plus, you’ll find yourself learning several different languages on the side.

This TV series from PBS is a breath of fresh air in a world of mind-numbing television shows, movies and video games. Not only is the series entertaining and quirky, it’s also educational. The entire premise is to teach kids the importance of grammar and the joys of reading, while each episode takes the time to teach vocabulary and introduce and educate viewers on subjects such as history, computer science, hacking, and even drugs, but does so in such a way that kids enthralled in the series will subconsciously learn and their vocabulary will grow, without them even realizing they’re learning at all. Kids are also encouraged at the start of each episode to keep with them a notebook to use to keep track of the clues. They are taught throughout the series the use proper grammar, how to write letters and how to write using the simplest form. This allows kids to unconsciously learn while engrossed in a television adventure.

It is also quite unique in the fact that four (five in “Ghost Story” and “Into the Light”) thirty-minute episodes (or “arcs”) compile together as one full-length adventure. Each arc ends with a cliff-hanger to continue the adventure. So, although season one may say it only features eight episodes, it in fact features thirty-four arcs compiling into eight full-length adventures or “movies.”

This series, like most PBS programming, is low-budget and not as well-made as many other teen series, such as Disney Channel or Nickelodeon shows. Ghostwriter also features actors with little to no previous acting experience, causing some of the first season to feature tenuous acting. Due to the low-budget, Ghostwriter often appears slightly cartoonish.

But since when do kids care about acting or realistic animation? I know I never did. Ghostwriter is highly enjoyable with a great mix of comedy, mystery-drama, music and even a slight instance of romance. It’s mature enough for a teenager to watch and enjoy without their younger siblings (or even adults, seeing as how my mom still enjoys Ghostwriter), but not so mature that it can’t be viewed by a five-year-old without being monitored.

This series remains one of my all-time favorites. I recently began watching it again and was afraid it would be like many movies I loved when I was younger: dorky and no longer entertaining for a seventeen-year-old; but no worries for me since I still find it as enjoyable now as I found it when I was ten or eleven.

Seasons one and two, plus one “movie” from season three have been released onto video and can most likely be found at your local library or corner video store; all of season one has recently been released onto DVD and can be bought online. Due to loss in budgeting, season three only consists of three “movies” or full-length adventures, two of which can no longer be found since they were never released to video and it is unlikely they will ever be released to DVD, but hey! With Hollywood, you never know.

*appears in every episode

**Blaze Berdahl performs the Ghostwriter theme and is a rapper, performing several songs throughout the series; the most popular to veteran Ghostwriter fans is “You Gotta Believe” from “Don’t Stop the Music”.

**After the show’s cancellation, the episodes began airing on several different channels, including Noggin, in reruns. Seventeen of the “movies” were allowed be put into reruns; all except for “What’s Up with Alex?” This “movie” was not allowed to be rerun due to drug content. 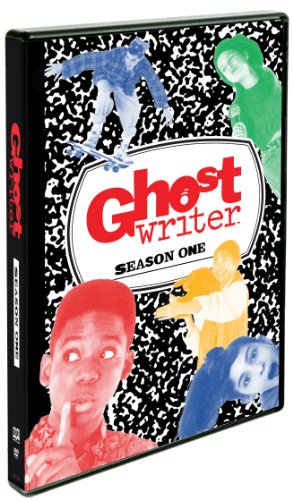