It was the middle of the summer of 1999. They were both four. She had brunette hair and bright blue eyes. Her pupils were always dilated. Her mom said that was God’s way of letting in the light of the world so her personality would reflect joy and light up other’s lives. She could be the sweetest and most caring girl you’ve ever met, but when she was in a mood, she could also be the sassiest. She loved causing a ruckus in the previously still water with her first talent of speed swimming. She had also been generously gifted with arms and legs that could charm the most judging people of all in her movement across big stages. Her smile could light up a crowd.
He on the other hand was a great soccer player. His lengthy, lean legs carried him effortlessly back and forth on the field. His eyes were a mysteriously dark brown and his hair matched perfectly. His smile, like hers, was as bright as the moon and the stars.
With only two months between them, they had been together practically from birth. They had been inseparable since day one as were their parents. The two did everything together; played, ate, bathed, learned, explored. Each day evolved into a new adventure in their eyes; each adventure, a savored memory. The two were entertaining to others as well as themselves.

She was soundly sleeping with thoughts of fields of luscious green grass blowing in the gentle breeze floating about in her head. Outside her window, the sun shined and clouds hovered overhead. It was a beautiful day for playing and running for people of all ages. As her mother called to her, she moaned and asked for a few more minutes.
“Lilie, it’s time to go to Martha’s and see Ian!” Lilie jumped straight out of bed and let her mom dress her and brush her long, golden locks.

As they walked out of the house, Lilie exclaimed, “Wait! I forgot my picture I drew for Ian.” Finally, after countless minutes of waiting, Lilie emerged from her room.

“Okay, I’m ready to go play,” she said, her curls bouncing with each step.

“Well it took you long enough sweetie!” replied her mother.

They got in the car and started off towards Martha’s house.

As they were pulling into the driveway, Ian came sprinting out the door towards the car. Martha was not far behind trying to catch her son before he fell or ran into the car.

Lilie jumped out and the two ran inside to start the day’s adventure, while the two chuckling mothers were left outside to chat and chuckle about their lovely children.

Inside, the “Inseparable Duo” headed to Ian’s room to get the gear and material needed like spoons, sand pales, and their walking sticks.

As they sauntered out the door, they looked around and decided which path to take. They unanimously chose the ditch by the house that led to the mysterious jungle.
They walked for hours in the scorching heat beaming down on them. It was almost unbearable. Just as they were about to faint from the heat, they found the jungle. Taking their first steps in was exciting, yet nerve-wracking at the same time. Before getting into the trees, they glided over the glistening pool of water by a rope hung by another tree on their side of the bank.

Hanging from the strong, brown branches, they could see the whole sky above them and tall, dark green, rain-spotted trees below. They swung by curling vines and dug trenches to find multiple colorful snakes lying in the cool dirt trying to hide from the heat.

As they were walking, a huge ‘booming’ shook the leaves off of the weaker branches and made Ian’s and Lilie’s stomachs flip. Rapidly turning around, they discovered a huge snow leopard pounding towards them. The two took off sprinting towards the end of the forest in hopes of escaping the beast and its huge pearly white teeth.

“We have to run faster Lilie, come on!” Ian yelled behind him.

“I’m trying but my shoes are too big!” she exclaimed.

So Ian, being the nice young-boy self, traded shoes with Lilie so they could get out of there as fast as possible.

Knowing they were far from exiting the forest, they searched for another alternative. To their delight, a cave stood just a few feet away from their location. The children dove behind the dark, black, musty walls and took cover. Clinging together, they held their breath and waited for the leopard to discover their hiding place and kill them. To their fortunate surprise, the ferocious animal sauntered right by them without a passing glance in their direction.

The two hugged and tears of joy flooded down their faces. Hand-in-hand they walked out of the jungle and went back inside the house for lunch. After the meal, the two rambunctious kids would have a whole new adventure ahead of them.

Although they never left the backyard, they had as much entertainment as if they had gone to a real jungle. A little imagination and a friend is all you need for a lot of fun. 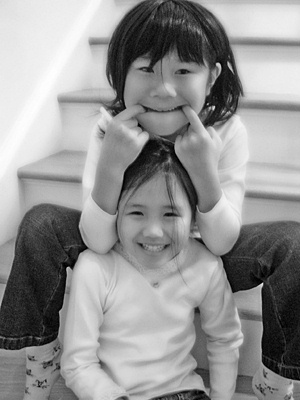 The author's comments:
I wrote this story for a required Adv. English piece.
Post a comment
Submit your own

Nellieks said...
on Nov. 18 2009 at 12:20 pm
I loved the descriptive quality of this piece, and the pure childish joy of exploring. Keep writing.