You were named after the stars, because they said you deserved it. They said you would shine, in one way or another. But regardless of whether you shone close to or far from our earthly homeland, you would still be a star. And I know you hoped, along with them, to become some sort of sun one day.

You might have accomplished that, for a brief instant. In my eyes, at least. But that didn’t last nearly long enough; almost as soon as you had engulfed me you started to fade away, all before I could even begin to adapt.

A barren, charred planet, I cut your namesake out of everything I had left – which wasn’t much: a few old movie tickets, hastily-scribbled notes, a hospital visiting pass, and that space-black shirt you made me. And then I threw them all out. My wastebasket filled with star-shaped fabrics and materials of all kinds. It was an obsession, taking over my every thought, one that showed itself in absence rather than presence. In the very act of getting rid of your name, I created its contour in what was left behind. I made myself clear, clear reminders of the fact that you were missing, even as I rejected the actual stars I had carved from anything I could get my hands on.

I never took anything out of my wastebasket, ever though it soon started to overflow. You were gone, and gone you’d stay. In addition to being the black hole in my heart, you literally became the ever-gaping holes in my belongings. I understood. You weren’t going to just let me go easily. And I wasn’t just about to let you disappear. The outlines of your earthly existence always remained.

When I finally resolved to leave the darkness of my dwelling and re-expose myself to the world, without you this time, it was too sudden and without adequate protection. I wore that shirt, missing a piece in the back, onto the city streets, a lone alien walking an empty universe. I could have blamed it on global warming, the hole in the ozone layer, or even the weatherman, but the truth of the matter is that I emerged carelessly, and was blinded by the sudden light. The sun’s strength fell on my bare skin hard, using the stellar shape as a stencil to guide its burning. The unfilled hole was an opening, practically inviting the center of our solar system to sear my skin raw. My feeble protection peeled away.

Amputating you from me had left only a void of definite shape that screamed to be filled. And its cries were answered as a painful star was engraved into me.

But that cloudless night, while taking a walk to clear my mind with the pink patch on my back still lightly provoking my nerves, I felt like I truly belonged. Although the geometrically-constrained burn was only skin deep, for that moment it was a huge part of me. As I looked up to the stars and thought of your cold body lying deep in the ground, I wondered which distant light in the sky your spirit had become. 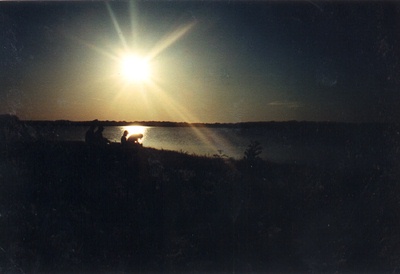