Rain to Quench the Desert MAG

This land was built on sorrow. The ground was cracked and parched. The surface held together; with every footstep it broke into another cloud of dust. Clouds that promised storms sometimes gathered above. Heat lightning would flash and thunder’s roll would sound – but the rain never came.

This town was 16 miles west of the interstate. Folks around here normally said the interstate was really 16 miles east of nowhere. Sometime in the past an old highway strayed near, but that was before my time. Now the old highway has been stripped of glory. Instead, it was absorbed into the main interstate that leads away from the border to places with streets where color has bled into cracks, instead of dust, blood, and hate. The once-gleaming black asphalt has turned a dark gray from all the dust that no one ever steps foot on. The highway was always empty except for the merchant’s truck, which came on Saturdays.

This land has seen the faces of hopeful young men and women when they first arrived, bright-eyed with hope for the future. This land has also seen their hope taken away with a single squall of the merciless wind. Their anguish has bled into the soil, causing another generation to be built on broken dreams. They are young no longer, for the Fountain of Youth dries up here.

Yet the settlement has felt hope at times. Back then, the land was green. The elders say that the land had been in drought, but once the original settlers came, it bloomed to life with God’s will. The blessed rain, they said, came every fortnight – always on Sundays. No one, however, remembered when the early settlers came. My father said his father was a boy during that time, but now he can barely remember his father’s face because he’s been gone so long. Like my mother, whose spirit broke, like the rain that never came.

The citizens of this town knew of hardship and sacrifice. Faces of both the young and old were etched with lines from squinting against the harsh sun for so long. Natives were soft-spoken, their hands callused from trying to till the soil. Yet they all believed that God would send the rain someday, on a Sunday, just like in the old days. They were honest people, at least the natives were, and hard-working. The others that made up the dwindling population were runaways and drunks who tarnished the gleam. I was not allowed to walk the streets alone at night because of them.

The only memory the place had of its green past was a fountain, once shining with glory and flowing with precious water. The fountain was made of marble and stone, with the founder’s name engraved on a plaque. But with all the duststorms the name was barely legible, and no one here could read anyway. A face lost to history, buried under the sands that the settlement now resided on, like we all would be if the rain never came.

Somehow, somewhere in my mind I didn’t believe I would ever see rain. I was not one of the faithful, and no one understood why. I didn’t know, either. I blamed this all on the runaways, the drunks, like my family. Later, I ended up blaming myself. But who was really to blame?

From where I sat on the swing on the porch of the general store that my father owned, I could almost hear the sighs coming from the tired earth again. I closed my eyes as a gust of wind swept up a fistful of dust, and sighed. I was to be 18 in a few weeks, yet it I felt I was nearing 80.

The wind pulled at the pins in my hair. The wind, which never stayed the same for too long, knew of everything, everyone. It was like the old dark-skinned lady, Gitana (whom I am forbidden to see because everyone thinks she’s a witch from hell) who gossips at night when no one else is around. She told me of Pastor Martin running off at night with the bar waitress Nicole; she can make homemade nail polish, and she swears she can hear the ground quake and the sky tremble. Just as it was said to be when it last rained – but no one ever believes her.

My back ached from hauling wooden crates from the cellar to the porch for the crops that would be sold. Out of ten heavy boxes, only three were filled with the dried-out corn, sun tomatoes, and gnarled peppers. Another failed harvest. I felt that the land, in desperate attempts to keep itself alive, would drain a little more life from me. Those roots which held us together were brown, the blossom far past wilted. But that is if I had any roots left to the land at all.

The merchant’s truck was at the corner, and the people of the town gathered, armed with their own wares, trade-items and coin purses. Digging in my pocket, I pulled out the last of my money and joined the crowd. I had forgotten it was Saturday. The woman, her two daughters and husband were chatting with bargainers and socializing, as they did every Saturday.

The merchant’s wife, whom we all called Ma’am and showed more respect than to our own mothers, had set up a table. I craned my neck to see what was on display this week. On the table were ribbons of more colors than I knew existed, dazzling hair barrettes, water in bottles that smelled like heaven and an assortment of necklaces and bracelets glittering in the harsh sun. There was also a pair of ghost-white gloves, a color I had never seen before, pure and untainted. I stared.

Ma’am, in her simple yellow dress, and with hair the color of scarlet gold, was beyond the words for beauty. She raised her hand to shield her eyes from the sun. The diamond shard embedded in her wedding ring cut the light into beacon-like arrows. I had to avert my eyes in fear of being blinded. Through squinted eyes I saw she was wearing a pair of silken white gloves identical to those that lay on the table. I could not look away.

That night, as Gitana smoked her homemade cigarettes, I wore the white gloves for the first time. In the candlelight in her attic apartment above the laundromat was where I first tasted a life outside my own.

“They’re beautiful,” I whispered. Gitana, despite her one blind eye, looked at me sharply after taking a prolonged breath. When she exhaled, the smoke clouded the tiny room. The smell of cloves lingered long after its source had vanished.

“Ah, so you have been to see that merchant woman again today. The woman with the daughters?”

I wondered how she knew about Ma’am, as I had never seen her on the streets.

“You would be surprised what is in here,” she said touching her salt-and-pepper hair. I said nothing. “You’re almost 18, aren’t you?” When I nodded, she continued. “Why do you wear those gloves?”

I was silent for a long moment. I stared at her cigarette, the smoke swirling into designs that I knew no name for. They looked tangible when I held my breath. When I sighed, my hot breath blew the smoke away. Like the dust. Like the land. Like my life. One crazed thought sped into another, then another, following another until I could not stand the silence any longer.

“Do you ever wonder – I don’t know – dream of the rain, Gitana? Do you? Do you ever feel like the land is speaking – no, crying – to you, like you actually could do something about it? Does it ever seem like we might be waiting for something that is never going to happen, that one day we’ll all die and nothing was ever done?”

I stood, the words that I had never thought I would say coming out in shouts. “I do! I want the rain to come – something to … a rain to quench the desert’s thirst! I want a life with color! Ain’t that possible? Ain’t it, Gitana?”

Despite the fact that my voice had reached a high, hysterical note, Gitana sighed deeply. The smoke rippled intangibly, just out of reach. In her ever-calm, soft-spoken voice, she simply said, “Go. There is nothing more for you here.”

It was not yet morning as I practically danced down the streets of my childhood town. The houses all glared as I waltzed past them, wishing they could follow too.

My father’s store I waved to. Thanks for all the good times, old friend.

I rounded the corner and passed the clothing store next to the laundromat, whose dresses in the windows scowled at me like old, bitter women. I laughed.

The marble fountain came into sight. I paused to give one last glance back. For a moment I hesitated. Then, I walked to it and I could finally see for the first time the name of the founder that time seemed to have forgotten.

Thomas Wesley Kaisen, my father’s name, but he is Thomas Wesley Kaisen IV. I sighed. I couldn’t wait forever for a rain to quench the desert’s thirst like Thomas Kaisen or my father. And if the rain does come, where to carry on afterward? I could soften my rough hands; I could learn to dress like a lady; I could make a new way of life. I could not, however, learn how to root myself to the land where sorrows have nurtured it instead of rain.

I stood up and ran down the street that would take me to a cow pasture, which marked the edge of town. Beyond the pasture, my father waited in his dented Chevrolet pickup. I could almost feel the ghosts of the plants swaying, but I couldn’t take their grief any longer. There was nothing I could do for them.

I stopped, however, when I reached the car. I turned to face the town that was on the brink of extinction. Another lash of wind whipped at me, and storm clouds gathered overhead. Heat lightning flashed. Thunder roared.

“Come on,” my father yelled over the thunder.

He did not smile, but in his tone as he fussed over me, he was proud. I knew. 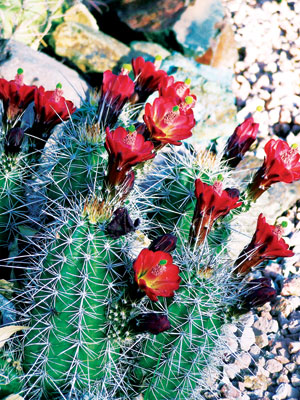