Favorite Quote:
"I'm not a smart aleck, I'm just so smart everyone else seems to think so."

I first met Mary’s son on the night he was born. He was always Mary’s son, never mine; the angel had made that perfectly clear. When I’d tried to leave Mary before her son was born. I’ve always wondered why he didn’t just let me leave, for surely the Son of God did not need a mere man to be mistaken for his father. Yet, I decided to do my best by the child; not only because God had wanted me to, but because he would have part of Mary, the woman I loved and never should have suspected of betraying me for another man.

When the boy was born, we did as the angel had said and named him Jesus. As jess grew, I tried to at least be something of a second father, though perhaps I was more like an uncle or something of the sort. No matter what I did, I always felt inadequate. He was so wise and good, so very perfect and I, the man he was supposed to looked up to and adore, was just a simple carpenter. Still I did the best I could, and taught him my craft.

When the leaders killed him for nothing more than correcting them, I grieved. Yet, I felt ashamed because I did not grieve as a man does for his son, but like a man does for his neighbor’s son who he watched grow up. I didn’t weep like Mary, who cried for her son she’d carried in her womb. Jesus had never been my son. I held my wife close and walked home with her.

When Jesus arouse from the dead, he came to speak to Mary and me. He told us things, wonderful thing, about faith, forgiveness, and a love everlasting. Talking with him I realized something. He may have never belonged to me and he may have never been my son; but I’d always belonged to him and he would forever be my savior. 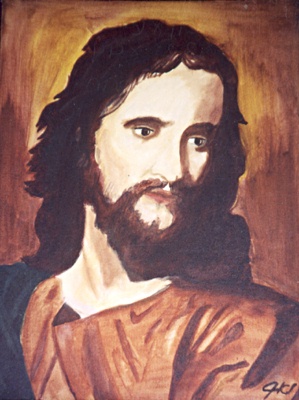 The author's comments:
I've always wondered how Joseph felt raising a boy who wasn't really his son. This is what I think he was thinking.
Post a comment
Submit your own