Nothing could ever stop the tears from rolling out of those troubled eyes. Like pearls from a broken pearl necklace, they rolled till they couldn’t anymore. Her angelic face was disturbed, cracked; she refused to believe in simple facts that were being dictated to her. Her love emerged like a wall between what she wanted and reality. He simply had said that he was going to be deployed the next month and that there was nothing she could do. She would not see him again for two years. Could this mythical beast live inside for that long? Could she actually withstand the fire that wanted to eat away this structure of love inside her?

They had been together for two years already. Their relationship had started as any innocent adolescent adventure commences. The “miss you” texts and the five-hour lasting calls. It was all the same. Life would continue as life always does; within all of its ruthless days and hours of happiness, like a roaming roller coaster. There was nothing anyone could do to change how life went. It just went.

Five months in, and he bought her a ring to simply show how much she meant to him. She opened the box and looked at the inscription; it had a simple phrase inside: forever yours. Being a foolish adolescent she felt overwhelmed at first. She did not have great expectation from this relationship. She raised her eyes to look at him and that is when it happened…

She took a long-lasting gaze at his mesmerizing hazel brown eyes; it was like getting lost in space, losing all connection with any pain that was connected to the human world, forgetting all problems, and ignoring the occasional thought of possible solutions. Nothing mattered but him. It was simply simple.

That was the moment she realized that she loved him, that she adored every imperfection, and was ready to embrace all the insecurities, even the fucked up secrets of the past. She was ready for this. She was already committed; the contract was signed and no questions were asked. He noticed her eyes, the newly found sparkle, the emerging wonder, and he realized that this was it. She was her. Her. The one.

Love exploded from the fountain, they quenched their thirst, day and night. They simply had no reason to stay away from each other. Sure, they continued their normal lives, they went to school, and he continued his military training. Sometimes they wouldn’t see each other for up to two weeks at a time; but they didn’t care. The flame within their hearts would never be blown out. Never threatened. Never changed to maybe once.

He was still on the phone as she began to cry, his insides froze, and his heart turned to stone. Pain emerged and filled the weak corners of his plasma. He loved her but there was nothing he could do. He needed to go. He needed to stay true to his second love: his country.

“How?” she responded, “life is so hard with you so far away.”

“Heat yourself with the fire. The fire that we built together. Please my love. Please. I love you.”

The call ended. Emptiness began to crawl into her, and her attempts to guard herself were useless. She let go. In order to hold on to sanity, she had to let go. She cried for hours on end.

Life continued. She graduated. Began her college career. But something was missing. She was empty inside; she didn’t have a life outside of classes and work. She would go home and write to him. Write to him when she felt anger, write when she felt pain, write when she felt love. She just wrote away, and along with the words that came out of her, sanity also escaped. She began to skip meals, skip class, and fail exams. She was on the verge of expulsion, the emergency room had been her second home, no details needed. Its all happened so simply.

Her admittance to the psych ward was just a detail, her malnutrition was also a detail, and reality escaping; simply another detail. Simply. One day she was taken out of her room, and put into a car. This car drove and somehow the sound of engine droned out her problems. She embraced her insanity and became one with her imagination. She didn’t know what her purpose was. Hell! She didn’t know what her name was. All she could remember was his face. And that was all her imagination was composed of.

The car drove on for what felt like ages, but was actually an hour. The destination? Unknown to her, yet it finally arrived at the airport. She was taken out and to a destination terminal. She was put in the middle of the terminal and waited for twenty minutes. Why? Why would they take her here? Her thoughts escaped.

Suddenly something woke her up. Suddenly reality and her imagination were one. There they were: the deep hazel eyes. She woke up. Insanity was no more, or better yet, it was one with reality. She leaped out of her chair and into his arms. He was back. Simply had jumped off a plane and was back. Simply back in her arms. She simply had snapped out of it like that. Everything; just so simple. Life became simplicity.

Never underestimate the power of love. It is a state of mind, which can cure all. Everything with love is simple. Love can ruin lives and yet also restore order. All in all, completely simple. That is all love. Give into it. There’s no escape. 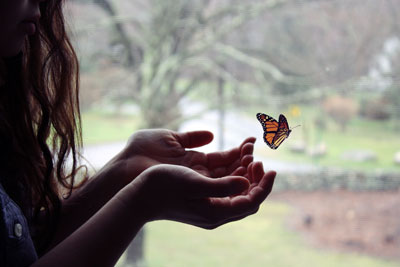