“Yeah, she’s pretty. But oh my God, do you know what she does at parties?” My best friend was staring at her salad, sadly devoid of salad dressing because of her special diet.

I frowned. She was so skinny. She had been a model at twelve but then she quit, claiming she didn’t like beauty contests. I had almost lost track of the conversation, but managed to resurface from my thoughts. I felt like I was always being distracted now, always lost in my own thoughts. “But she’s so nice—and parties are what a high-schooler does.”

My best friend ripped her stare from her lunch to instead glare at my face. “Parties are not what high-schoolers do, actually, Em. Nice people do not drink underage.”

Sometimes I felt like she was my second mom: so protective, so against having fun. But all I mildly said was “Oh, does she drink?” I almost wished I could drink. Just to throw a night away, like some of my classmates carelessly could without second thoughts—but my life was different. I would never get away with it, and I really wouldn’t want to either. I didn’t want to drink alcohol; technically, I just wanted to be as careless as the rest of the people in the party. I wanted to go out and enjoy myself for once—

“So, Em, whatever happened to that football player?”

I winced. It was like a slap coming from her. He had liked me the first week he had known me…then he forgot about me: I wasn’t popular enough. Not for him. “We’re…just friends,” I conceded, not really lying, not really telling the truth.

“Well, speaking of boys,” (we hadn’t been really) she kept pressing, “have you heard anything from your junior friends? About, well, whats-his-name?”

That’s why she had brought up the football player. So she could introduce boys into the conversation. And knowing how the subject irked me, she knew I wouldn’t elaborate on any stories about my life. She knew me so well. I sighed. “Alex?’

“Yes, him,” she snapped, later adding, “just sort of wondering.”

I knew quite a bit from him, since we talked yesterday, but she didn’t want to hear any news I had to tell. He hadn’t declared undying love for her—just the opposite, in fact—and I was at loathe to tell her so. But to be a good friend was share disappointment and to act like a devil’s advocate; at least, that was her role towards me. I delicately said, “Well, actually, we spoke yesterday. You know—quick hi in the halls.”

“So he was in the upper hall after that block… I can accidentally ‘bump’ into him.” She started giggling somewhat hysterically.

I leaned my head in my left hand. There would be more questions.

“So what’d he say? Anything about me? Did he talk to you just because you’re close with me?”

I bit my lip. “Well, we said something quick about you, and that’s probable…”

“Just, well, that you were nice and all, but he didn’t know you that well, and he had others in his life, and he thinks you guys should just be friends…”

She snapped back into it. “Sorry? What’s there to be sorry about? It’s not like I’m waiting around for him. He has other people, and so do I. I understand completely. That’s what will make us such a great couple! We’ll be best friends, and turn into something more…” She faded into her personal fantasy.

The bell rang. I sprang up quickly, saying I was going to be late. I walked away, trying to imagine myself winning the speed walking Olympic race, when I bumped into Alex—yet again.

“Whoa—hey. Perfect, just who I wanted to see. So, did you tell her?”

He nodded, like that was what he’d been expecting. “Did you say anything?”

“I told her half of it. It didn’t deter her any, though. You’d better watch out!” I said, trying to force a laugh.

He didn’t smile. “I don’t know much about your relationship, but you guys don’t act like best friends. She’s not nice enough, you two don’t mesh well together—”

And now he was the expert on meshing. “Well that just the way it is with us—”

“It shouldn’t be. And best friends don’t go for the other’s crushes. I’m serious, Emily, you have to tell her. I’m not going to do it. And don’t give in to her; be your own person. Do what you want for once.”

“Okay, Alex,” I said softly. He squeezed my hand, and walked away.

I liked that he hadn’t told me what to do. 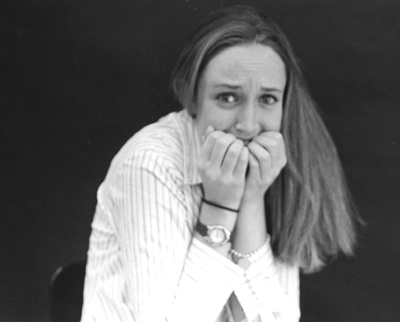