Flashing back three years ago to when that village was attacked.
The king had lead the attack for the reason of a simple sapphire ring that had been stolen from the queen the day before.
The king ordered that everyone be searched for the ring, and that the person that it was found on shall be brought in front of him.


When the soldiers found the ring they bought a man forward, Victor asked him why he stole the queens wedding ring, the man replied with the fact that his family was so poor and did not have money for food, heat, or clothes.

Victor took just a minute before he threw down a bag of coins to the man, and said all he would have to do was ask, the king signaled Jonathan to give money to the rest of that village. But a greasy like haired knight objected to the idea of giving money to the villagers for the simple reason that they did not deserver it because they were not in Victors kingdom, Victor snapped back with it doesn’t matter everyone deserves to have something wither it money, food, heat, or even a sword.
Some people were meant to lead, and there were some who were meant to raised families and work, there is a balance to everything, the people who worked and farmed were just as important as the nobles.
The greasy hair man road off, after the solders were done give the money out and victor had collected the ring they left. Later that night the greasy haired knight returned with some of his men and torched and killed. When the returned to the castle Jonathan was waiting in the court yard.
The greasy haired man told Jonathan that they were attacked by the villagers that they helped that day, and the had to kill.
Jonathan did not tell the king because he knew that the king would rage war with the neighboring kingdom.
At the present time it had become night Victor-the king was a crying in his bedroom holding on to his wife’s only dress.
Down on the battle field solders were starting to load bodies onto wagons, but there were villagers searching for there loved ones, a little girl was searching for her father when she herd a odd sound, the little girl walk toward the sound, it sounded almost like breathing through water, the poor little girl saw Natasha had survived enough to breath.
“Momma…Momma…momma” the little girl cried being her mother the Natasha.
The little girl grabbed Natasha’s had and held on, she would not let go, a few villagers help carry Natasha to the village, there they layered her on a table and called the medicine man.
These villagers also believed there was a difference between defending your self and murder, they never killed they only fought off.

The medicine man sewed up Natasha’s wound saying that she was the luckiest women ever, the sword mist every major organ.

Because Natasha was not that far along, the baby miscarried from the loss of blood and trauma to her body.
It took her a few weeks to recover, Victor had brought the people back from the forest the bodies of the departed solders were burned, and Natasha had took he first steps outside.
She walked through the village, they thought her how to use a staff to render a person unconscious for hours. She had decided it was time to return to the palace a rule with out killing, one of the village women pulled Natasha into he hut and told her that Natasha had become a lady a needed to dress like one, the women pulled of a red regal dress and a pair of gold colored strappy sandals, Natasha was honored she put on the dress and sandals, the little girl handed Natasha a cloth bag for he clothes and sword.

Natasha carried a staff from now on that way no one else got hurt.
Jonathan had been taking care of almost everything, because victor had been devastated by Natasha’s death.

Jonathan could not take the pain of the knowledge of what had happen to the small village, he finally had the courage he needed. Jonathan told the king, you could see in his face that he was full of rage, imagine a volcano exploding.


While the king was busy yelling at Jonathan which you could almost hear at the castle gate, which is where Natasha was at that very moment, she covered her face with the hood of her cloak so she could return unnoticed.
The greasy dark haired knight, noticed Natasha and then he saw her face, panicked and afraid of punishment for his crimes he called an attack on her, through her new knowledge she successfully knocked all the nights out as she got the castle steps that lead to the great hall.


Still fighting with guards and knights a she walks up the steps, Jonathan and Victor came out to see the battle, because she was not killing anyone they just stood back and watched the greasy haired knight and his men get beat up, neither Jonathan or victor could see her face.
Natasha stop nobody but Jonathan and Victor were left standing, but she told her self old habits die hard, as she looked on a maze that was lying on the ground.
“Pick it up” Victor said as he took of his coat.
“NO...” she replied, trying to disguise her voice.
“oh why not that’s why you’re here isn’t It…to kill the already heart broken king.” He said as he walked down the steps.
“No more like make you come to your senses about murdering, as you may have noticed I have killed none of these men, only knocked them out.”
“oh…well…I think not…I rather like killing”
“Is that what you were doing when, the queen died you were murdering people.”
“That is it you have signed your own death warrant.”
“Oh really that is if you can make it that far.”
They began to fight, sword to staff, she hit his head, he cut her hand, she knocked him onto the ground he twirled her around about to slit her throat with his sword when he asked.
“Why did you come here…to die…to kill me…to make history…to save me?”
“To LOVE you.” She reached behind her and touched his cheek.
Again he twirled her around, she removed her hood, with blood on her hand she hugged him, he fell on his knees stunned he was still embraced in her arms.
From then on they ruled as they loved instead of a iron fist they ruled with there hearts, the greasy haired knight and his loyal men were banished and were never seen gain, the queen and king had three children two girls and one boy, and Jonathan was godfather and protector to them all. 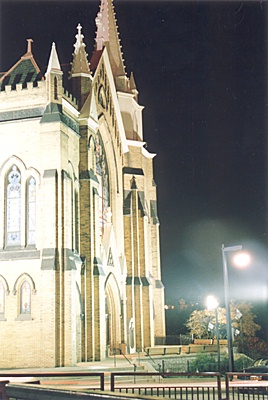 The author's comments:
Like most of my storys it was based of one of my dreams, i originaly wrote because i was late with a writing project, then my english teacher told me i should publish so here i am...i've been writing storys since i was in the first grade, just hope this story inspires people to tell the whole truth and to love with your heart along with your head.
Post a comment
Submit your own