Favorite Quote:
"When you're taught to love everyone, to love your enemies, what value does that place on love?" - Marilyn Manson

Police cars surrounded the Manhattan home, their lights piercing the night’s darkness. A couple sat on the porch steps, the woman wrapped in a blanket. As Zukowski approached them, he took note of the red, white, and blue color scheme used in the blanket, but the patterns were hardly American. Some of the officers had said that their English was poor and difficult to understand. That would only make getting the story pieced together more difficult.


At his advance, they glanced at him in unison. The woman’s eyes were a striking ice-blue color that seemed to intensify her emotions, but she looked unwilling to speak. The man beside her, however, looked more amiable.

“Excuse me, sir,” Zukowski said, gesturing calmly to him, speaking slowly and enunciating properly so that he could better understand. “Do you understand English?”


“We are not very good yet, but I will try,” he replied after a pause. A strong Russian accent dominated his speech, making it difficult to hear correctly.


“I am Isaac Moskovsky and this is my wife, Irina.”


“What sort of trouble have you had?”


“Svetiana, our daughter, is missing. She is only six years of age. We have been home all day with her, so we do not know how it happened.”


Zukowski looked up at the large tri-level house. The daughter could have sneaked away, but it also looked old—he could feel a strange history behind the place. “When did you last see her?”


“An hour ago. She plays with porcelain dolls from our motherland and that is what she was doing when we saw her.”

Zukowski closed his eyes, feeling the usual cold fear trickling down his spine and through to his extremities.


“Oh, here is a picture,” Isaac said after a moment, obviously taken aback at first by the question. He produced a wallet-sized photo of his daughter, who looked just like the dolls she loved. Her glossy brown hair was curled in ringlets and she still had the impossibly long, dark lashes of childhood, along with round cheeks and a small, almost pouting mouth. Very like a doll, Zukowski thought, handing it back.


“Thank you, Mr. Moskovsky.” Zukowski returned to the policemen standing in a tight circle beside their cars. One of them was writing furiously in a notepad. “Any clues yet?”


The one writing looked up. “Nope. None of the windows were unlocked. All of the doors were locked, too, and could only be locked from the inside or with a key. The only key is around Mrs. Moskovsky’s neck.” He looked upon Zukowski with a hint of contempt and a lot of skepticism. All officers did. “Why don’t you go take a look for yourself?”


Without responding, Zukowski ducked into the house. He was accustomed to that attitude from law enforcers. The inside of the house was what could be expected. It was sparsely furnished, partially because the Moskovskys probably didn’t know enough English collectively to purchase much beyond food. Much of what they had was of distinct Russian craft. He noticed immediately that they collected antiques or heirlooms that had been around for a long time—china with designs that were popular in the 1800s, chairs with lions’ feet, and a drafter’s kit from Nazi-era Germany sat displayed on a chest. On the table was a sewing kit and various garments as well as quilts lay around in assorted stages of completion. He veered left and entered the daughter’s room.


It was a small room that appeared wide-open because of the lack of furniture. Small shelves had been built into the walls for her doll collection, although most of the obvious favorites were kept on top of her dresser. Zukowski glanced at all of them. Their lifeless stares frightened him in a way that ghosts, the future, and even murderers never could. He suppressed a shiver and looked at each doll individually.


They were beautifully made— there was no mistaking that. They all looked so real, almost like miniature children sitting in dated clothing with flaccid limbs. As he looked closer, he realized that they each had unique traits that no doll maker could ever take the time to add. Some had small, almost invisible scars, freckles, birthmarks, or almost unnoticeable asymmetry. The details were hauntingly realistic. Fingers were very slightly curved, strands of hair with color out of place, little brown freckles dotted doll arms and legs… no doll maker would take the time do add those details. The dolls were not of the same mould.


He stepped away from the shelves, breathing heavily. Deepening his breaths, he tried to steady his nerves, but it was useless. A lingering presence tugged at his mind. Though it didn’t feel hostile, he could sense an ill temperament. “Who are you?” he asked, sweat trickling down his neck. “Why are you still here?” No answer came. His breathing was still erratic.


Zukowski finally reached the end of the doll collection. The child must have had a hundred dolls. His head spun. Something was wrong, but he couldn’t place it. The energy of the place was feeding off him, taking his strength away.


But something wanted him to stay.


He turned around. On the bed was a doll he hadn’t seen before. It had glossy brown ringlets and slightly pouting lips. Zukowski’s eyes went wide as he stepped closer to get a better look. He was shivering with fear. The dolls lips pulled up at the corners. Distinctly in Russian, a child’s voice said, “Let’s play a game.”


Suddenly, the dolls were arranged in a circle around him, their melancholy smiles and distant eyes locked on him. He felt nauseated. “Are you Svetiana?” he asked, losing himself in their nearness.


The doll on the bed stood and her head cocked to one side as if dropped by a puppeteer. The neck popped free of the shoulders and hung out of the socket grotesquely. Dolls weren’t meant to move their heads in such a way. The ubiquitous voice resonated sweetly around the room, like a gong in an empty space. “How do you know my name, seer? Tell me!”


“Your parents are worried about you. I’m here to help you.”


A realization struck him. Zukowski had talked to the dead before, but he had never talked to them directly. It wasn’t possible. “Are you alive somewhere?”


“Alive?” Svetiana repeated. She laughed. “I’m very alive. I’m so happy… but I’m lonely. Mommy and Daddy won’t play any games with me.”


“They don’t know that you’re here. They can’t hear you when you speak.”


“I know. That’s why I want to play with you instead.”


“We don’t have time for games, Svetiana. Where are you? I can help save you.”


“I’m right here!” The doll’s head returned to its correct angle. The eyes sought him out and locked on him like human eyes. “Don’t be stupid. I told you, I don’t want to be saved. I’m happy here.”


They were touching his ankles and feet now. Their eyes all stared up at him in a way that dolls would never naturally look. His unease engulfed him in black and his consciousness was mercifully taken away.


“Damn me,” Jacobsen said, pushing the pad of paper back into his shirt pocket. “No leads. Nothing. Get Zukowski out and tell him not to touch anything.”


Jacobsen returned to his car, straightening up the pile the documents that he’d have to fill out after this whole mess was sorted out. The officer he’d talked to moments ago returned with a blank look. “Well? Where is he?”


The two officers returned to the daughter’s room. On the bed were two dolls. One was a brown-haired girl. The other looked exactly like Zukowski. 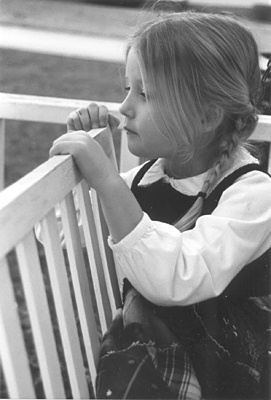 lizzy said...
on Jan. 2 2013 at 11:12 pm
this was so interesting and i got to say i dont read unless its got my full attention i want to read so much more and if possible this wud make an amazing movie i can already see how it goes in my head