Favorite Quote:
"Things have to get worse before they can get better"

I cannot grasp the concept of the people on this earth

Your looks & your social ranking determining your worth

Your state of mind at a constant worrying and fear

His thoughts take up his head, he sobs, pain all too severe

Wish I could wake up everyday, not worry how I look

I wish this place I lived, loved us all the same

But i’m a man, I cannot feel, unless i’m screaming about video games

That as children we had no say, in fact we were compelled,

I’m the knight in shining armour nothing more, nothing less.

Slaughter pigs for you, take them back into the house.

Now fold my clothes, don’t speak, let me bathe in what I’ve accomplished.

“No! I wanna help you! Lets garden food instead.

But the land we live on is screaming at me, telling me i can’t

Why? I’ll never know. I do not understand.

Men on Earth feel threatened, at least I assume,

And so they tell me not to clean the house, “It’s a woman’s job to do”.

Come home, my wife’s worthless, act like a jerk

When I was young they told me to be a knight,

To save the princess, to be a hero

And I thought that all my life

But then I met this man, and oh how I loved him.

I’m a stay-at-home dad, married to my husband.

And there’s no princess in sight, except our lovely daughter.

I tell her this story only, no fairy tales, no others

Because you don’t have to be recused , you can save yourself.

But equality and loving those of the same sex isn’t the problem,

Stealing hope, devouring it, and with every single word

Left here is an exoskeleton, example of what you’ve done

Children from other countries desperate to escape

Racism’s another issue, it’s been going on for years

It isn’t fair that different colored skins have to fear

White supremacists yelling, telling them get out

Colored crying, “please don’t shoot he’s the only thing I have”

White cops, white rights, he killed them but it’s fine

Pride parades; this man was born in the wrong body.

I want to change myself, feel happy, so that I can love me.

But I’ll get lip fillers change my whole face, my whole shape

Change is always hard, but even harder when

Because of your looks you are segregated,

It’s getting late and,

It’s men, assumptions that they want us all to die

Guns, violence, should we get rid of them or no?

Depends, are you a conservative or liberal?

Here’s another story about another guy

He’s the reason teens are lying wide awake at night

Why stereotypes matter more than who we are

Why no one and nothing is accepted anymore

Man versus him but it’s his mental health

Man versus it but we don’t know what that is

Other than the gaping hole of social epidemic

But not the kind that makes Nike’s sales go viral

The kind that makes my head spin, my mental health spiral

And believe it or not there’s a cause

Holding all of my will, taking it with it’s jaws

But I won’t , for it’d take too long and get old

And the older it gets the harsher its words

Forgetting we are human

Oh no, he is neither

Not kind, nor brave

The fire only burns at night when light’s darkest

Destroying our desire to breathe and to fight this

No more hope in the world

I breathe my last breath, look up, and say “f you society”. 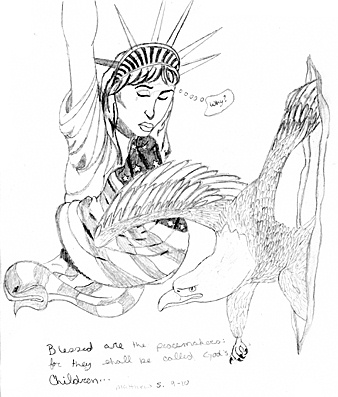 Favorite Quote:
Not all those who wander are lost
- J. R. R. Tolkien

Everything has beauty, but not everyone sees it
- Confucius

Believe you can and you're halfway there
- Theodore Roosevelt

It is during our darkest moments that we must focus to see the light.
- Aristotle

Nothing is impossible, the word itself says 'I'm possible'!
- Audrey Hepburn

The best and most beautiful things in the world cannot be seen or even touched - they must be felt with the heart.
- Helen Keller

View profile
Wow @graciepratt...this was incredibly strong and I really enjoyed reading it. It was raw, and emotional, and I believe it was extremely good, and I think that you have a lot of talent and potential, keep writing, I'll keep reading :)